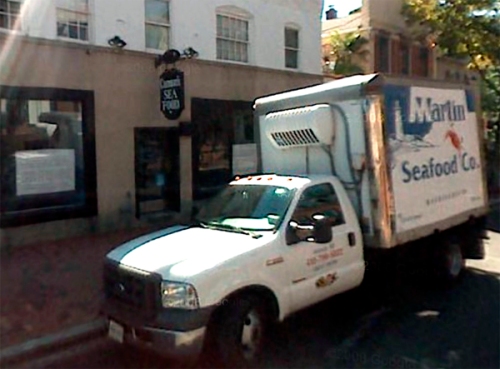 As reported in the Post, on Thursday the owners of Georgetown’s Cannon Seafood on 31st St. pleaded guilty to violating the Lacey Act, which prohibits individuals or corporations from creating false records for fish, and from transporting, selling, or buying fish harvested illegally.

According to the Department of Justice press release, over the course of four years from 2003 to 2007, the owner and president of Cannon’s, Robert Moore Sr., and his son, Robert Moore Jr., bought striped bass (also known as rockfish) from three Chesapeake watermen outside of the required seasons and harvest limits. The Moores agreed to plead guilty and pay a combined $150,000 in fines and $53,000 in restitution.

This is a sad story on several levels. Cannon Seafood is a fantastic fishmonger and a treasure of Georgetown (although GM wishes they were open on Sundays). It’s a family owned operation that has been around for generations. Hopefully this won’t lead to its closure.

This is also sad on the environmental level. The Moores allegedly trafficked over 30,000 pounds of illegally harvested striped bass. According to the Chesapeake Bay Program, the Chesapeake Bay is the primary spawning ground of Atlantic striped bass. it is the nursery ground for 70 to 90 percent of the stock. Although aggressive efforts have greatly restored the health of the Striped Bass stock, they are constantly at risk. Illegal fishing can take a toll. Surely some large portion of that 30,000 pounds ended up on Georgetown dinner plates.

Finally, it would seem this is also a sad story about desperate fishermen. The Chesapeake waterman is a dwindling and nearly extinct breed. In our region’s striving for the perfectly green lawn and a highway to every garage, we have nearly killed the Chesapeake bio-system. Maybe these fisherman would break the law in good times as well as bad, but chances are that if the crab and oyster populations were at their historic levels, illegal fish harvesting would not be nearly as tempting.

Filed under Around Town, Crime