The Myth of the Apple Store 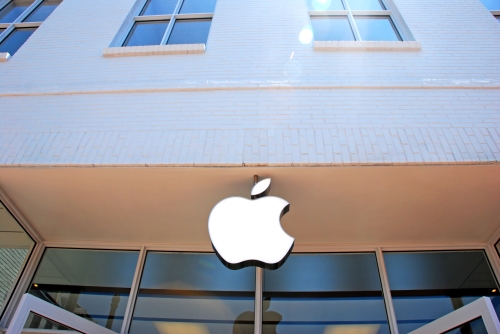 Georgetown is subject to its share of popular but wrong myths. None is more prevalent–or wrong–as the myth that resident opposition to a Metro stop is why there’s no station here. It persists as a myth because it comports with what a lot of people think about Georgetowners (and in turn reinforces those opinions).

Well, GM has noticed another myth is starting to take hold: that the oppressive design review of the Old Georgetown Board is why it took the Apple Store two years to open in Georgetown.

Like many myths, there is a kernel of truth at the heart of it. Namely, it is true that it took Apple a long time to get design approval for the new building. But first of all, it didn’t take two years, it took 19 months. The first design was submitted for review in September 2007 and the final design was approved in March 2009. But, yes, a year and a half is rather a long time to get design approval.

But whose fault was the delay?

This is the design Apple first submitted:

Look familiar? It should, it’s almost exactly the same as the final design. But the Old Georgetown Board rejected this first design, expressing concern over the wall of unbroken windows that would be presented to the street. The focus was on scale, not necessarily style. The board simply thought a wall of glass with no articulation (i.e., window frames, transoms, etc.) was too inconsistent with the buildings around it. They even encouraged Apple to submit a modern design, just one that addressed this concern.

It wasn’t a flat out no, it was simply a request to make some tweaks to the design. Maybe you disagree with that request, but so long as you want any sort of design review of construction in a historic neighborhood, you’ve got to accept that you might not always agree with the design reviewers. (And if you think Georgetown would be better off with no design review, check out this monstrosity in Glover Park and ask whether you’d like to see that in Georgetown).

Besides, this request didn’t need to add materially to the length of the review process. Apple could have come back next month with some options to appease the OGB. But they didn’t.

It wasn’t until nine months later that Apple came back with new designs. And rather than make a few tweaks, they came back with an ice cube: END_OF_DOCUMENT_TOKEN_TO_BE_REPLACED

Not So Long Ago: Wisconsin and Prospect

This week for Not So Long Ago, in honor of the new iPhone 5 that probably will be announced this week, GM stops by the Apple store.

Nowadays this stretch of Wisconsin Ave. hosts Ann Taylor Loft, the Apple store, and Nine West. GM can’t make out what was in the Ann Taylor Loft. It appears that there was a store called “Black and White” on the upper floors.

As for the actual Apple store address itself, there stood a building that Apple knocked down to build its store. GM believes that building was built in the 1980s and replaced a parking lot. In 1993, it hosted a diner called Boogies. One commentator described it thusly:

In the early 1990s, there was a branch of Boogies Diner in the Georgetown section of Washington, DC. They tried to sell trendy clothes in a diner atmosphere.

The clothes smelled like grease, and the restaurant area smelled like leather. Suffice to say, the concept did not work.

It lasted less than a year. Enough said.

According to this article, it opened in 1990, so the 1993 photo testifies to at least three years of greasy leather and leathery food. Sometime after 1993, the French Connection UK moved into this space (and occupied it until Apple bought the property). GM’s not sure if anything was in here between Boogies and FCUK, but if there was it probably wasn’t for long.

Finally, on the right in the space where Nine West currently is there was nothing. END_OF_DOCUMENT_TOKEN_TO_BE_REPLACED

The Apple Store started selling Georgetown Cupcakes. Or at least that appeared to be the case on Friday, but it turns out the crazy long line was for the new iPad part duex and not cupcakes. According to reports, at some point the line stretched around the corner on M St. all the way down to Thomas Jefferson. Bananas.

Well, GM’s not sure, but probably at least some of those people went home empty handed since the store sold out of the new tablet by the end of the day on Friday. By Saturday morning when GM stopped by the store, there was no line and sparse crowds because they still had no iPads. GM overheard one employee mention that the Tyson’s store may still have some, but it had the air of a desperate prospector talking about rumors of a few gold flakes in a river two valleys over. END_OF_DOCUMENT_TOKEN_TO_BE_REPLACED

Photo by Per Hoel.