Where Would a Metro Stop Go Anyway?

While it is now little more than a glimmer in transit nerds’ eyes, the likelihood of a Georgetown metro station getting built is larger than you may realize. On the right is a map that appeared in the Washington Post in 2001. It described long term plans that WMATA was considering for the expansion of the Metrorail system. Those plans called for a splitting of the Orange and Blue lines. The new Blue line would split off from the Orange line at Rosslyn and travel parallel to the Orange line through downtown, finally meeting up with it again at Stadium-Armory. In building this separate Blue line, WMATA would have the chance to remedy the mistake it made decades ago and finally build a Georgetown station. In an act of enormous cart-before-the-horseing, GM wonders: where exactly would this station go anyway? But before we get to that, we need to go back to the 1960’s first.

The first thing to address if you’re going to start talking about the history of Metro and Georgetown is the old canard about why Georgetown doesn’t have a station in the first place. The story goes that in the 1960’s a bunch of rich Georgetowners didn’t want hordes of minorities coming into their neighborhood on the Metro so they successfully petitioned WMATA to nix any plans for a stop. This telling of this story chugs along year-after-year because it fits in with the negative stereotype of a Georgetown resident: rich, racist, and well-connected. Unfortunately for the storytellers, it’s fiction.

George Mason professor Zachary Schrag tracked down the true story of why there’s no Georgetown stop. In his definitive history of the building of the Metro “The Great Society Subway“, Schrag writes that while there was some opposition to the building of metro stop in Georgetown from the residents, the engineers never seriously considered building

one there. The grade from the Potomac up to M St. was too steep. Moreover, plenty of neighborhoods across the city were not too excited about a metro stop coming into their neighborhood, but it wasn’t out of racism or xenophobia. It was out of a fear of the disruption to business that construction would bring. Indeed many stores in areas like U St. and Clarendon were knocked out of business due to Metro construction.

So that’s why we don’t have a Georgetown station, but was that our only shot? WMATA doesn’t think so. In 2001 WMATA recognized that it could not indefinitely send both the Orange and the Blue lines through the same tunnel between Rosslyn and Foggy Bottom. A new crossing would be required to handle the increase in traffic expected over the next couple decades (particularly with the addition of the Silver Line to Dulles and Loundon County). In building a new Blue line parralel and north of the Orange line, we would be afforded an opportunity to finally build a Georgetown station. The Post wrote back in 2001:

The suggested 22-mile leg, which is being called the new Blue Line, could include room for 11 new stations. Among them would be a stop in Georgetown — at M Street NW and Wisconsin Avenue — where the idea of a Metro station was shunned a generation ago but is now welcomed as a tonic for parking and traffic problems.

[It doesn’t help in stopping the urban legend when even the Washington Post keeps repeating it].

What happened to those plans you ask? Money. The new line would cost $6.3 billion to build and WMATA was already running a $5.2 billion shortfall. So the plans simply faded away. That is until last year.

Last August WMATA staff gave a proposal to the WMATA Board of Directors addressing the long term structural needs of the system. In those plans was a revived proposal of a split Blue line, including a Georgetown stop. David Alpert at GGW has written extensively about this.

But where exactly would that stop specifically be? In 2001 WMATA suggested M and Wisconsin, and frankly that seems like the most likely possibility. But where would it even fit? GM thought it over and can think of a couple possible locations from Metro exits. They are:

Next To PNC Bank: 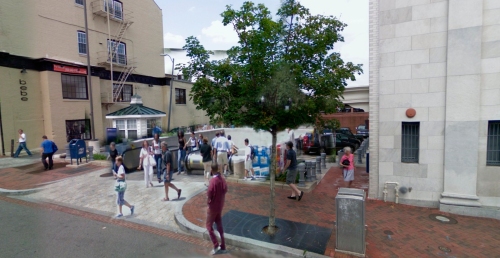 Right now this is parking lot. There seems like there would be adequate room to build an escalator exit here. While no location around here would be without serious complications, this one seems the least complicated.

Next to the Canal 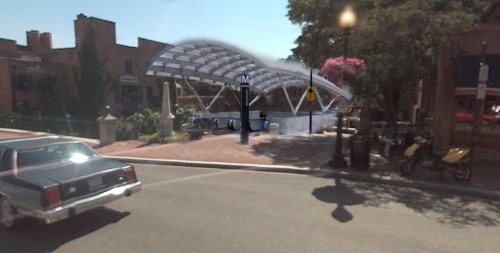 The modern canopy is unlikely under any situation, by GM threw it in here just for consideration. As for the space itself, there seems to be a decent amount of room for an escalator here, but there may be a lot of complications trying to build so close to the canal. 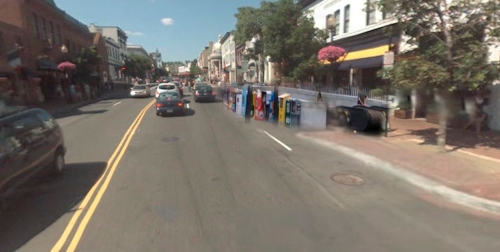 This plan would take out some of the parking spots and perhaps a lane on Wisconsin just south of M. in GM’s opinion, this would probably be a decent trade-off. There is never a ton of traffic coming up Wisconsin from K, and it is hoped that with a Metro there’d be a significant drop in driving anyway.

These are just brainstorms. But it does seem that nobody has thought too hard about the location question more specifically than just “M and Wisconsin”. What do you think? Where would you put the entrances? Anywhere else you’d put the station? Maybe down closer to Key Bridge? How about the other direction towards downtown?

19 responses to “Where Would a Metro Stop Go Anyway?”