Circulator to No Longer Ascend Wisconsin? 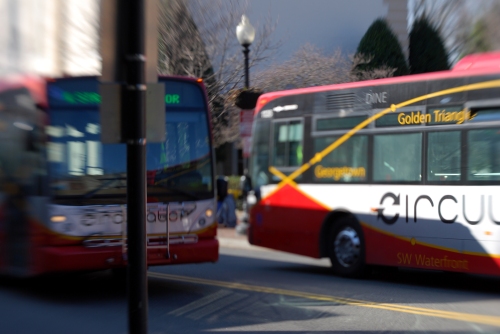 On Friday, Jennifer Altemus, President of CAG, sent out an alert on the possibility that DDOT/WMATA are considering the possibility of cutting Circulator service up Wisconsin Ave. This was the first GM heard of the proposal, but the proposal has a strong bit of deja vu surrounding it.

Right now the Circulator travels along M St. from downtown, turns up Wisconsin Ave., and ends its route at Whitehaven St., just behind the British School. This was not always the route it took through Georgetown. Originally it entered Georgetown on K St., took a right up Wisconsin, and turned back to downtown at M St.

In May 2007, the Circulator was extended up Wisconsin to its current route to take over the Blue Bus’s Foggy Bottom route. In less than a year after this extension, DDOT was already floating plans to cut it (despite the fact that the Blue Bus route it replaced was cut once the extension took place). After strong pushback from the community, DDOT decided to keep the extension.

Yet here they (apparently) are, back again considering to cut bus service up Wisconsin Ave. For some reason DDOT just can’t give up the dream of cutting Circulator service up Wisconsin. This is a bad idea. Georgetowners have lost a lot of downtown service since the 30 series changes. With the re-opening of a more street-friendly and vibrant Social Safeway only 8-10 months away, cutting the Circulator to its door would be counter-productive. Finally, with the long-term proposal of adding a bus lane to Wisconsin, it seems short sighted to cut bus service on the corridor. If bottlenecks are arising, targeted removal of parking along Wisconsin Ave. would be the better option to significant service reduction.

If anything, the Circulator should be extended up Wisconsin to Calvert to cater to Glover Park. In recent years, Glover Park has emerged as a destination neighborhood despite its distance to the Metro and lack of abundant parking. Adding service from the successful Circulator route would be immensely popular, in GM’s opinion.

If you agree with GM, please write to DDOT (ddot@dc.gov), the Mayor (mayor@dc.gov), and Jack Evan’s office (jackevans@dccouncil.us) to object to this unnecessary and unfair service cut.

16 responses to “Circulator to No Longer Ascend Wisconsin?”