GM is at the beach this week, in his absence enjoy a rerun of his series on Georgetown architecture:

This week GM is exploring the varieties of historic architecture in Georgetown and offering a field guide to help you identify each particular style.

For American architecture, the Romantic period stretched from 1820s to the 1880s representing the last years of the Federal Period through to the middle stages of the Victorian Era. In Georgetown the two most common Romantic Period styles are Greek Revival and Italianate.

Greek Revival style homes were the dominant style across the U.S. from 1830s to 1850s. So much so that it is also called the “National Style”.  Whereas Roman designs influenced the Federal period, increasingly intellectuals looked to Greece as the more appropriate model for the young democracy.

Greek Revival homes have several distinctive characteristics. The most dominant feature is typically the inclusion of some sort of an elaborate entry porch with Greek columns (with a preference for the simpler Doric-style columns). Here is an example from Georgetown:

Another distinguishing feature of Greek Revival homes is a wide band of trim for the cornice, like this (also notice the less elaborate window trimming with simple Greek features): 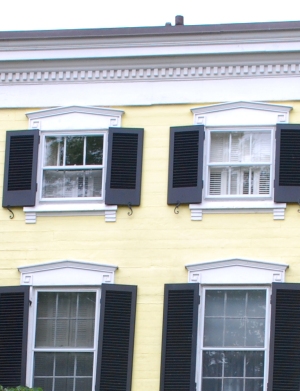 In all honesty, GM has never really got the hang of Greek Revival, and doesn’t always do a good job of separating out Greek Revival from less elaborate examples of the Federal style. So with that caveat, he presents some examples of what he thinks qualifies as Greek Revival homes from Georgetown:

Whether it’s his difficulty with the style or whatever, GM simply could not find a ton of examples of Greek Revival in Georgetown. It seems that it was a town that skipped right ahead to the next style: Italianate.

The Italianate style emerged in the 1840s and lasted through the 1880s. It beckoned to the romantic ideal of a folk Italian villa, and was, ironically, developed as a reaction to the overly formal classical styles that also came from Italy (via Rome).

The most distinguishing feature of the Italianate style is the use of large brackets beneath overhanging eaves. Here’s an example: 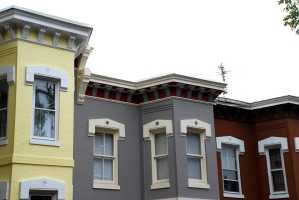 They’re larger and more chunkier than the dentil mouldings popular in the Federal Period.

Another feature to help identify Italianate homes are the windows, which are frequently surrounded by upside-down U-shaped mouldings with flamboyant styles like these:

Cooke’s Row on Q St. between 30th and 31st have some stunning Italianate homes:

While some of these homes have features that are associated with other styles such as Second Empire (which GM will cover tomorrow), the large elaborate brackets and the square towers identify them conclusively as Italianate.

Once you start looking out for the hallmarks of the Italianate style, you realize just how dominant of a style it is in Georgetown. GM estimates that it constitutes 30 to 40 percent of all homes in the neighborhood. Here are a few of that crowd:

The Romantic Period started to peter out through the middle part of the 19th century and was soon overwhelmed by the Victorian Era, which started in earnest by the 1860s. Tomorrow, GM will take on the Early Victorian Era.