treasure that is in absolutely terrible shape. A newly formed group aims to fix that. Named the Dumbarton Oaks Park Conservancy, this group has ambitious plans to bring the park back to the state it was in when it was first shaped by the legendary Beatrix Farrand. It will be a long, long slog to get to that point, but from what GM hears, the organizers are up to the task.

For those not familiar with Dumbarton Oaks Park, it’s twenty-seven acres of wilderness and Italian romanticism, all hidden away in the northern boundaries of Georgetown. It, along with the Dumbarton Oaks mansion and gardens formed the original Dumbarton Oaks estate.

Robert and Mildred Bliss bought Dumbarton Oaks in 1920. They soon after hired Beatrix Farrand–an influential landscape architect who had already established her reputation with her work at the White House and the National Cathedral–to reshape the gardens and grounds of the estate.  Farrand, for her part, had studied extensively the Italian renaissance style of gardens and brought that expertise to bear on her work for the Blisses.

While the gardens and grounds immediately around the mansion are quite formal, Farrand’s plans for the land that ultimately became Dumbarton Oaks Park were rustic and natural. In fact, according to Historic American Buildings Survey, much of the natural landscape of the park predated Farrand’s work there. In other words, Farrand made her work accommodate the nature she found there, rather than vice versa.

While Farrand worked around nature, she certainly left her stamp. Walking through the park, one can still see the bridges and waterfalls Farrand planned, as well as the path through the meadow she laid out.

But what you also see is dramatic overgrowth, particularly of invasive vines. You can also see that the waterfalls and pools are in shambles. The main cause for this degradation is the lack of money and attention from the National Parks Service, which was granted the land from the Blisses in 1940. Since then, responsibility for the park has shifted from the Rock Creek Park administration to the George Washington Parkway administration, and back. Over time, the park was ultimately ignored by the overburdened and under-budgeted Park Service, and the natural landscape degraded.

Throughout the years, groups of volunteers have pitched in to preserve the park (you can still see the sandbags they installed). But there is only so much occasional volunteer efforts can achieve. And that’s where the Dumbarton Oaks Park Conservancy comes in.

The conservancy was formed this year by landscape gardeners Rebecca Frischkorn and Jane MacLeish. They aim to work with all the stakeholders around the park to bring it back to the state it was in when it was opened to the public exactly 70 years ago next Tuesday. And to mark the occasion, the group is hosting an event next Tuesday at 4:00 pm at the stone bridge (seen below after a snow storm in 2005) to commemorate the anniversary. Professor E.O. Wilson will give a talk. 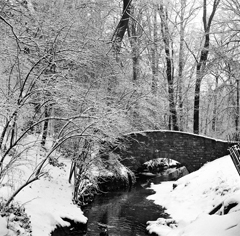