This Is How Bad Transportation Decisions Are Made 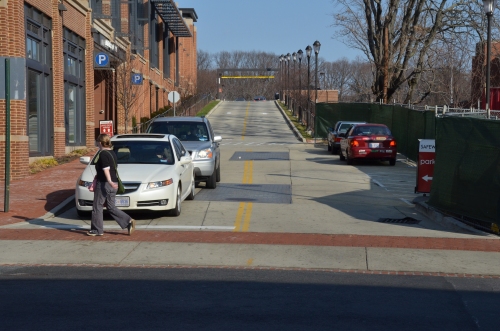 At the last ANC meeting, the issue of the south exit of the Safeway was discussed. GM discussed this after the meeting, but he thinks it’s worthwhile to walk through the story of the changes to this intersection because it demonstrates how too often bad transportation decisions are made.

Prior to the construction of the new Safeway, and shortly after it opened, there were three different phases for the lights and crosswalks of this intersection: 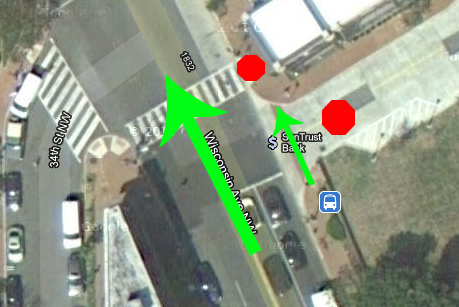 During the first phase (which is 60 seconds), car traffic on Wisconsin Ave. had a green light and pedestrians were allowed to cross the curbcut at the Safeway exit. Cars leaving Safeway and pedestrians crossing Wisconsin were shown a red light. 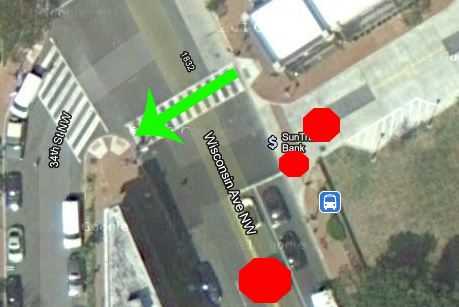 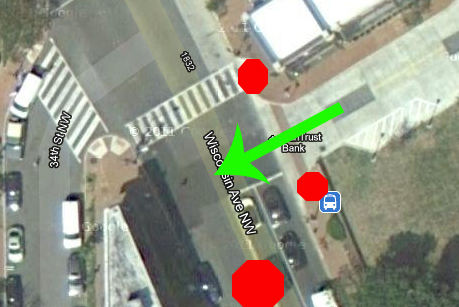 Back in February of last year, the ANC took a look at that second phase. They reasoned that with pedestrians crossing Wisconsin on the north side of the intersection, there was no reason not to allow cars from exiting Safeway to the south (since there was, as still is, no crosswalk on the south side of this intersection). The ANC recommended also that the second phase be extended.

But rather that make these pedestrian-friendly changes, the ANC decided that the real problem was that for six seconds or so drivers had to wait for pedestrians to cross when the drivers could be exiting southward. So the ANC convinced DDOT to change the second phase to this: 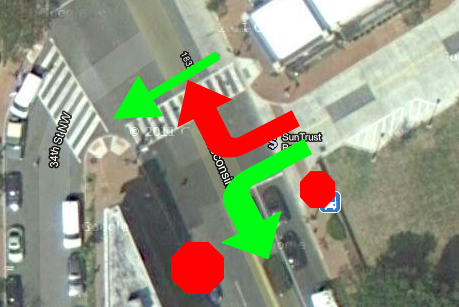 Pedestrians could still cross Wisconsin from the north side of the intersection, but they still couldn’t cross the curbcut. Cars still couldn’t make a right turn, but they were now allowed to make a left turn. The phase was extended to the 20 seconds it is now.

But  now some on the ANC are pushing for yet another change. You see, sometimes the first car waiting at the Safeway doesn’t want to make a left turn. So cars behind it that do want to make a left turn have to wait a whole twenty seconds before the first car can leave, and then they can leave. So some of these impatient drivers have complained to the drivers-should-never-ever-have-even-the-slightest-delay caucus of the ANC to create a new left-turn lane at the Safeway exit. Craig Muckle of Safeway came to the ANC meeting saying they’d be happy to add the new lane.

But widening the curbcut (or simply adding a new travel lane without widening the exit) would be yet another anti-pedestrian move. For instance, while turning right on red is not allowed at this intersection, that doesn’t mean drivers don’t do it anyway. And with another traffic lane, the visibility for cars trying to make this illegal right-turn-on-red could be reduced and could cause them to not see pedestrians crossing the curbcut legally. And just generally, Safeway has put a lot of money into making this block more urban and pedestrian friendly, for them to increase the curbcut traffic by 50% diminishes the gains.

But some don’t see it this way. Some completely forget the history of this intersection and only care about the fact that some drivers now are frustrated at missing out on the new left turn arrow. This is how bad transporation policy is made: by making incremental concessions to the endless impatience of drivers. Attempts at appeasing drivers will never succeed and only will result in more demands, which results in cascading decisions that further push pedestrians and bikers out of the way.

Thankfully DDOT is against the new demands, and GM hears that after the ANC meeting little progress was made. But it would be nice if the ANC would stop being the voice of the incredibly impatient and would put pedestrians first.

9 responses to “This Is How Bad Transportation Decisions Are Made”