Kicking a Guy When He’s Down 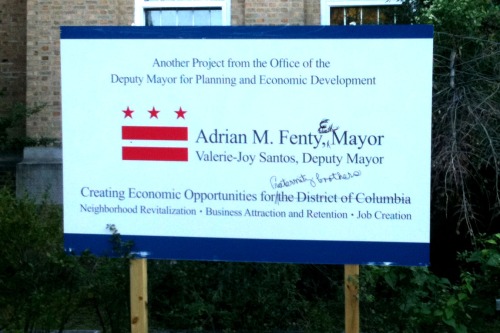 This large sign has been sitting outside the Hurt Home since the summer. After the primary some wiseacre has modified this sign to kick Fenty when he’s down. If you can’t make it out, it says “Adrian M. Fenty, Ex Mayor” and later it reads “Creating Economic Opportunities for the District of Columbiafraternity brothers.”

Whoever wrote it must be very pleased with himself since after writing it initially, he came back with a darker pen and traced over his opus to make it easier to read.

For what it’s worth, there haven’t been any accusations that Argos Group is in anyway connected with Fenty’s fraternity.

GM doesn’t support graffiti like this, but really, these vanity signs are pretty bad in the first place. They use public funds to serve one purpose: increase the mayor’s approval rating. This one is particularly bad since: A. Fenty’s name is about 50% larger than all the other text, B. It provides no useful information about the project, and C. It’s freaking huge.

GM hopes (but doesn’t expect) that Vincent Gray won’t waste our money on self-congratulatory signs like this.