Why Not: Bring “Performance Parking” to Georgetown?

If there’s one thing people (both resident and visitor alike) complain most about Georgetown, it’s parking. Residents can’t reliably park close to their homes and visitors circle blocks over and over looking for a spot to leave their car for a few hours as they eat or shop. It seems like a perpetual problem without a solution. But there is a solution for residential street parking near entertainment districts: here in DC we call it “performance parking” and it’s an effective means by which scarce parking spaces can be efficiently allocated while simultaneously giving preferences to residents. Read more about how this program already works over by Nationals Park and how it could work here after the jump:

The basic idea behind performance parking is that if you raise the cost of meter parking high enough, people who plan on parking for a long period will simply use a pay garage instead of searching for a cheap spot on the street.

The first thing to establish is that there is not a shortage of parking in the heart of Georgetown. Not by a long shot. It’s just mostly located in pay garages. Look at how many pay garages there are in around M and Wisconsin:

That map may even be leaving out one or two that GM missed. And with the possible exception of the small outdoor lots, these garages are almost never full. And why should they be? As long as it only takes 5-10 minutes driving around our residential back streets to eventually find a free parking spot, why would somebody choose to fork over money for parking?

And that’s the central thrust of performance parking (a philosophy put forward most effectively by Donald Shoup in his book the “High Cost of Free Parking“). So long as the city is giving away free or virtually free on-street parking, people will: A: keep driving around in circles looking for the free spot, and B: leave their car in the free spot for as long as possible. Doesn’t that sound a lot like Georgetown on a Saturday?

So why not install parking meters throughout the neighborhood (in particular, multi-space meters like the ones we already have on M St.) and make people pay a lot more to sit their car in front of our houses for hours at an end? Residents would be exempt from the meters, plus they would be given guest passes so that their visitors (including nannies and nurses) could stay longer without having to pay. We could even make some streets resident parking-only. (If you don’t even like the idea of multi-space meters outside your house, DDOT Director Gabe Klein recently spoke about a “pay by cell-phone” idea that would only require the installation of signs).

It’s already being done in other parts of the city with success. The first place to try it was neighborhood around Nationals Park. Check out this map:

Each colored street has different rules. For instance, on the purple streets they allow only residents to park on one side of the street and limit the other side to two hour parking (residents exempt). The green streets prohibit all parking during game-time. The red streets have variable rates: ordinarily it’s $1 for the first hour and $1.50 for the next two (three hour limit) but on gameday it’s $2 for the first hour and $8 bucks for the next three. In other words, you can park there, but it’s not much cheaper than using the stadium’s garages. Each household is given one guest pass that acts as a resident pass. (There haven’t been many reports of abuse of the visitor pass. Although maybe that’s because the Nats are just so bad.)

It’s awfully complicated around Nationals Park because of the huge differences between days with or without events at the park. Georgetown’s system could be a lot simpler. How’s this?: 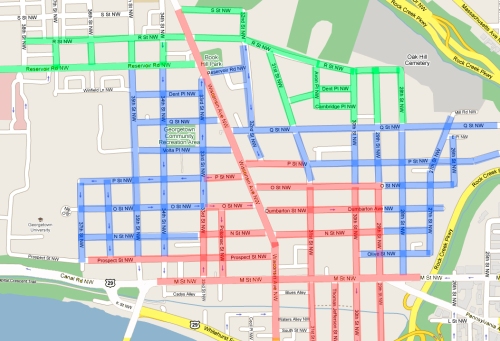 Here’s what the colors mean:

This is just a brainstorming map. It may not make perfect sense. It’s just an example of what we could do if we applied the performance parking concept to Georgetown.

As long as we give away free parking on our residential streets, people will endlessly drive around our blocks looking for it. This causes traffic and pollution and is dangerous since the drivers are often concentrating more on finding parking rather than looking out for pedestrians.

This is an idea that’s working in other parts of our city, but there may not be a neighborhood better suited for and more in need of performance parking than Georgetown.

Filed under Why Not

Tagged as Nationals Park, Parking, Performance Parking, Why Not

18 responses to “Why Not: Bring “Performance Parking” to Georgetown?”