A Field Guide to Georgetown Houses: The Late Victorian Period

This week GM is exploring the variety of historic architecture around Georgetown. Today he explores the late Victorian Period. For Georgetown that means primarily two styles: Queen Anne and Richardsonian Romanesque.

First up: Queen Anne. The Queen Anne style was developed in England by a group of architects in the 1860s and 1870s. It was meant to evoke a medieval period of English architecture, although it was a bit of a misnomer since the architecture popular during the real Queen Anne was actually a formal renaissance style.

The Queen Anne style that dominated American homes during the 1880s is characterized by asymmetrical design with a variety of different towers and hipped roofs that form an irregular roof line. Also, the surface materials included a variety of textures such as scale shingles and the homes were often decorated with elaborate spindles and other fanciful woodwork.  Basically, the classic “gingerbread” home that comes to your mind when you think of Victorian homes is probably a Queen Anne.

The thing is, in Georgetown (and central DC generally) this type of Queen Anne is not very common. GM could only find a few such examples in Georgetown such as this one:

The particular type of Queen Anne that is very dominant in Georgetown is what some call a Patterned Masonry Queen Anne. And you’ve seen tons of them.

Patterned Masonry Queen Anne homes are brick homes (mostly townhomes) that have a bay window front elevation. The key identifying feature for this sub-type is the use of shaped brickwork like this: 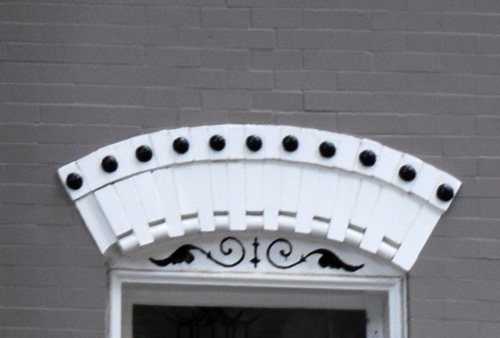 This subtype was enormously popular in DC and other Eastern cities for rowhouses. When you start looking around for these features, you realize these homes are everywhere. GM estimates that it is the single most common style in Georgetown. Here are just a few of the Patterned Masonry Queen Annes around Georgetown:

The second late Victorian style that you’ll see around Georgetown is the Richardsonian Romanesque. This style was created by legendary late 19th century architect Henry Hobson Richardson in the early 1880s. The style did not gain wide popularity until after Richardson’s death in 1886. It became very popular in the 1890s, however due to its expensive nature it was never that widespread.

You can identify a Richardsonian Romanesque from a few features. First of all, the style called for solid masonry construction. This gives them a monumental feeling. Typically this masonry includes large slabs of rough hewn stonework. Finally, being a Romanesque style, it included many curved roman arches. These elements all result in these homes:

In Georgetown, these homes tend to gather in clumps. This is probably because the homes were built as part of a single development. Since they were so expensive to build, they were generally “high end” developments. There is one such cluster at the intersection of Q and 31st, but other clusters are spread out through the neighborhood.

The Richardsonian Romanesque style was popular through about 1900. After the turn of the century, all Victorian styles fell from grace. A variety of styles took their place across America, including the Colonial Revival, Craftsman and Tudor (for more modest homes) and Beaux Arts and Neo-Classical (for more ostentatious homes).

But in Georgetown, this is about the time the village got off the stylistic tread-mill. By the turn of the 20th century, Georgetown was primarily a working class Irish and Black neighborhood. These families couldn’t afford the newest styles. They couldn’t really afford any style. They mostly lived in the homes of an earlier era or if they built new homes, they were of a simple folk style.

Interestingly, as the neighborhood gentrified in the 1930’s and onward, many of these simple folk homes were retrofitted with Federal or Colonial details. Nowadays these details are so old that to our eyes they look original and can mislead us as to the history of the home.

So that’s it. That’s the story of Georgetown architecture. Now when somebody tries to tell you that all our preservation laws are trying to freeze Georgetown as it was in the colonial era you can respond that no, in fact they’re trying to stop the clock at about 1910.

Tomorrow: GM explores the few quirky examples of homes that don’t fit into the dominant styles including some French Eclectics, Gothic Revivals, and even a Japanese house.