A Pity Upon A Hill 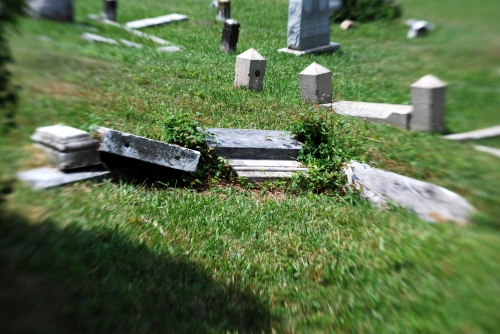 On a hill overlooking Georgetown sits a shameful display of neglect on the part of Georgetown University: Holy Rood Cemetery. Built by Georgetown’s Holy Trinity Church in 1832, the cemetery has a strong connection to the neighborhood’s history. It is the final resting place of generations of Georgetown’s German and Irish Catholics as well as up to 1000 slaves and free Black residents.

And today it is a mess.

Grave stones are toppled left and right. Weeds grow through the cracks. The overall feeling you get visiting it is that it has been abandoned. Check it out:

Georgetown University came to be the custodian of the cemetery when it transferred control of Trinity to the Diocese in 1942. While the numbers of burials declined sharply after the 1930’s, they continued in much diminished numbers. GM recently walked through the cemetery and found this headstone from a burial just last year:

According to a Washington Post article on the cemetery, Georgetown University once seriously considered trying to relocate the graves from the site to reuse the property. Walking through there, it doesn’t take long to figure out why: the property is beautiful and has amazing views:

According to the Post, GU President Timothy Healy said in 1984: “The University takes the position that someday, somehow, the University must be allowed to convert this property from cemetery property to some other use.” Apparently, however, the school has backed off those goals.

It would be quite a huge effort to relocate the graves. They’d have to try to locate descendants and ask if they would like to move the grave. Moreover, there are likely scores of unmarked graves on the site. It would take a wholesale search to make sure they don’t end up with a Poltergeist situation.

According to the Post, the University “know[s] that work needs to be done, and [is] trying to develop what next steps may be appropriate.” A year later, not much progress seems to have been made.

Interestingly, in 1878 in his Chronicles of Georgetown, D.C., Richard P. Jackson wrote about Holy Rood:

To improve a cemetery requires considerable labor and money, W’hich might be raised by the ladies of the congregation doing as the ladies of the Presbyterian congregation did when their cemetery was in a state of dilapidation— going to the lot holders and collecting five dollars from one, and ten from another; and those who were not able to pay, to give a few days’ labor in the cemetery. In this way Holyrood would soon improve in appearance, and become a resort for strangers as well as the citizens of the town. Certainly, those who are lot holders ought to take a pride in beautifying the grounds. One could plant flowers, another trees, others could gravel the walks.

Thus it seems that Holy Rood has suffered from disregard throughout its existence. But that is no excuse for the university. The school recently applied the finishing touches to a brand new business school with at least an 8-figure price tag. It should be ashamed that it cannot find adequate funds for the cemetery as well.

4 responses to “A Pity Upon A Hill”