Closing the Books on the Summer Crime Stats

About half-way through the summer, GM took a look at the crime stats and found that while the numbers were up versus last year, there did not appear to be a sharp spike in summer crime. Now that the air has a chill and the summer is officially over, GM thought he’d take a look back at the whole summer and see how the numbers stack up.

The punchline is that while crime was up in Georgetown this summer versus last year, it was generally in line with past years. Here’s a chart of the total summer crimes in Georgetown (i.e. June 1st to August 31st) from 2006 to 2009: 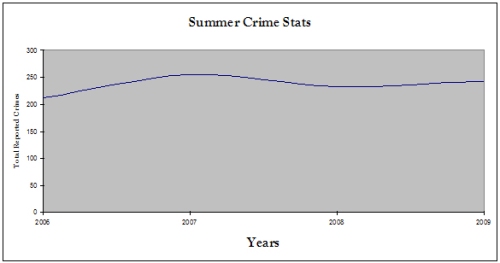 Because by far the largest single category of reported crimes in Georgetown is shoplifting, it’s helpful to look at the stats without thefts:

This has the effect of increasing the variation from year to year, but the general story is the same: while the stats are up from last year, they’re still lower than 2007 and in the general ballpark as across all the years.

As for crime-specific numbers, the story is a bit more interesting. As many could sense, car break-ins were up this year (although they’re still down from 2007):

In fact, the majority of the increase of non-shop lifting crime in 2009 can be traced to car break-ins. There were 22 more non-theft crimes in 2009 than in 2008, but 20 of those incidents were car break-ins. If we had just kept car break-ins level from last year, the overall numbers would be level as well.

Robberies, on the other hand, are up slightly from last year but are still low compared to 2006 and 2007: 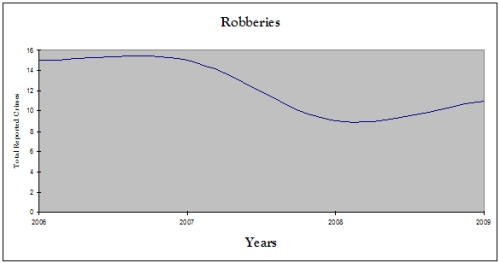