GM noticed that a new cafe is set to up on upper Wisconsin Ave. In the space previously occupied by the boutique Pink November (1529 Wisconsin, just south of the Chevy Chase Bank) Puro Cafe will be opening soon. 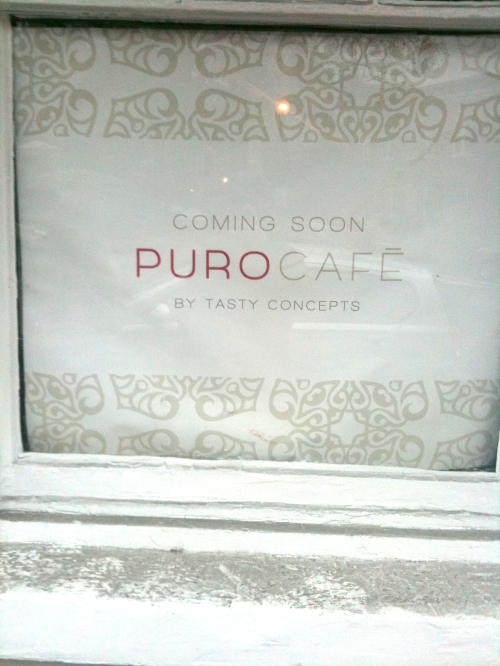 Ever wonder what sort of thinking goes into the design of restaurants like Puro Cafe? When wonder no further. The design team behind Puro Cafe is Tasty Concepts, a national branding and design agency behind the look of such local projects as West End and Mie N Yu. The Tasty Concepts team didn’t have to travel far to pitch in to Puro Cafe’s design; they’re located upstairs. Recently the firm described the concept of the new cafe:

When initially deciding upon the concept, the owner of the café , and friend of Tasty Concepts, came to us to create a dynamic concept and bring it to reality.  Roberto, Creative Director at TC, toyed with the idea of doing an all black or all white themed restaurant. Although the black concept was first decided upon, the concept quickly switched to a sleek, white concept after working on a project for The Ritz-Carlton in South Beach. The idea of an all white, chic, café oasis in Georgetown seemed very appealing to the café’s owner and the design team at Tasty. Originally “White House”, a nice play on DC’s main notoriety and the color concept, was a name considered, but after some further research and development by the design team, the concept of purity became one of interest and therefore a forerunner. Several translations of “pure” were researched, and in the end, the Spanish and Italian translation was chosen. Thus, Puro Café was born.

Hmm, it’s probably a good thing they didn’t choose White House, since there’s a clothing store of the same name that even has a branch open in Georgetown. Puro Cafe still sounds a little too much like a water filter to GM, but given Tasty Concept’s impressive portfolio, it will probably be a nice spot to grab a bite to eat.

One response to “New Cafe to Open on Upper Wisconsin”