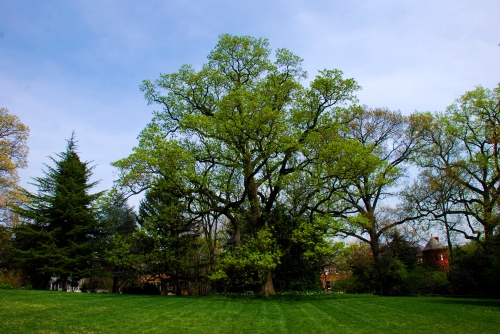 Tree-lined streets are one of the most often mentioned features that people associate with Georgetown. And it’s for good reason. Georgetown wouldn’t be what it is were it denuded of its beautiful tree canopy. Yet, beyond merely associating Georgetown with tree-lines streets, most people don’t think about our trees much more than that. So to address that, GM is introducing Tree Week here at the Georgetown Metropolitan. Each day a different topic relating to our trees will be discussed.

Throughout its history, the District of Columbia was known for its trees. In fact, it was often referred to as a city of trees. But that reputation was slowly lost during the second half of the 20th century. By the middle of the Barry era, DC’s street trees were in terrible shape. Georgetown was no better.

What Have We Got

There are roughly 3,000 street tree boxes in Georgetown. About a quarter of those tree boxes are empty. Historically they were placed basically wherever somebody wanted to have a tree. Nowadays restrictions on sidewalk width and other safety concerns mean that not all those tree boxes could be filled even if the funds were identified to do so.

Georgetown’s street trees are a mix of several varieties. The most common, though, are maples, oaks, and ginkgoes. You’ll also find some isolated groupings of other species like elm, ash and linden. But maples are by far the most prevalent. This is a good thing in the fall when we’re blessed with the flashes of orange and red, but having such a concentration makes us vulnerable to blights. In the case of the sugar maple, the Asian Longhorn Beetle poses a serious threat. To avoid a catastrophic loss of trees, the city now aims to have a variety of trees on each block and won’t plant any more sugar maples in Georgetown. Some of the newer varieties of trees being planted these days include honey locust, sweetgum, zelkova, hornbeam, and London plane.

Georgetown’s trees face several challenges. By far the largest is a lack of water. 2008 was a particularly bad year on this account. There was a severe drought the whole summer, which ended up killing many trees (some are still dying from this drought since it takes a long time for trees to actually die). But even in a good year, it’s incumbent on us to keep our young trees watered.

And speaking of our responsibilities, it’s critical to mention that we are the biggest challenge that our trees face. When we plant plants in tree boxes or allow dogs to relieve themselves on the trees’ roots, we are killing the trees. To address this, this week GM will go over the do’s and don’ts for caring for street trees.

What You Can Do

If you want to help ensure the health and longevity of Georgetown’s tree canopy, there’s really nothing better you can do than to donate to Trees for Georgetown. And right now is the perfect time to do so: Trees for Georgetown is having their annual fundraiser on May 26th. Call the CAG office (202-337-7313) to buy your ticket.

GM thanks Betsy Emes of Trees for Georgetown for providing most of the information he’ll discuss during Tree Week.

One response to “Welcome to Tree Week”