ANC Round Up: Moving On Edition

Last night the ANC met for its March session. The most important item on the agenda was the adoption of its resolution opposing Georgetown’s ten year campus plan. In the end, though, this was one of the shorter items on the agenda. The rest of the evening was filled with projects and items that will surely dominate the discussion for the rest of the year.

The discussion around the proposed resolution was strictly hemmed in. G.U., CAG/the Burleith Citizens Association, and DC Students Speaks, were each given ten minutes to make their final case. Linda Greenan, Vice President of G.U.’s external affairs, spoke first. She expressed the disappointment the school has that the parties couldn’t reach an agreement and reiterated the school’s position that the proposed plan is modest and has been tailored to address the neighbors’ complaints.

Lenore Rubino of the Burleith Citizens Assoc. and Jennifer Altemus of CAG then split up 10 minutes. They repeated their organizations previous statements that that the plan fails to seriously address the already existing negative impacts that the school has on the neighborhood and the threat that the non-student uses are going to be pushed out unless the situation is remedied. They both supported the ANC’s resolution (CAG strayed a bit from the ANC’s resolution by demanding that no students be allowed to park a car in the neighborhood).

Finally, Hao Shen of DC Students Speaks, well, spoke. He gave an energetic defense of the school’s proposal. He pointedly stated that objecting to the plan is a violation of the District’s Human Rights Act, which prohibits discrimination based upon matriculation status. This would be a compelling argument, that is if the DC Court of Appeals hadn’t explicitly rejected it in one of the court cases that sprung from the last ten year plan fight (837 A.2d 58, in case you’re interested).

Beyond this, there was little other discussion. Ron Lewis echoed Greenan’s disappointment in the failure to agree. In the end the resolution was passed 6-1, with Jake Sticka voting nay.

EastBanc presented its plans to build condos on the site of the Key Bridge Exxon (which will close in 2012). The plan calls for 35-37 units in the building shown above.

GM can say that the other renderings make this project look slightly better than this photo above, but not that much better. The problem isn’t as much with the building itself, as with the setting. The beautiful and massive Car Barn sits just to the east and a contemporary and busy (and in GM’s opinion, tacky) apartment building sits to the west. It may be impossible to bridge that gap, stylistically.

But the main objections came regarding views. The neighbors on Prospect and in the apartment building to the west all complained about the effect the new building would have on their sight-lines. For the Prospect St. residents, it would potentially cut off the lower portion of their million dollar views. For the apartment building, it would slice off a good part of their view of the bridge. Here’s a sense of the way the building’s massing would work: 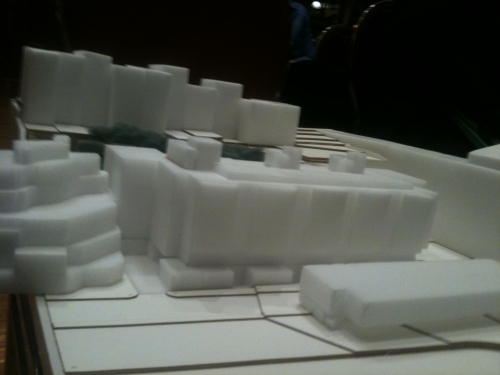 The neighbors want the building to be built basically as a wedge into the side of the wall in order to minimize the effect on their views. GM’s skeptical that would work. But he really can’t see the OGB accepting this plan as is. Either way, get used to hearing about it.

Another significant new project that will get a lot of attention was also discussed, and it’s also an EastBanc project. It’s a proposed new building for the parking lot in front of the Verizon switching building (i.e. between the canal and Grace Episcopal):

This would be primarily an apartment building, offering 9 huge units. There would also be some ground floor retail.

The most significant aspect of this project is the material: stone. It is meant to echo the stonework around the canal. It’s a good thought, but it gives the project a rather imposing hulking feeling. Maybe the details would lighten the impression. That impression is particularly strong when viewed from the tow path. As proposed it would have five stories of pure stone. GM actually thinks the design works best on that side, for some reason, but from the front it has a bit too squat a look. We’ll see.

GM would love to go on and on, talking more about the other items, but frankly it was way past his bed time. These damn ANC meetings are getting longer and longer. But here’s a quick summary of what else was discussed:

6 responses to “ANC Round Up: Moving On Edition”