Walls Can’t Talk But the Census Does 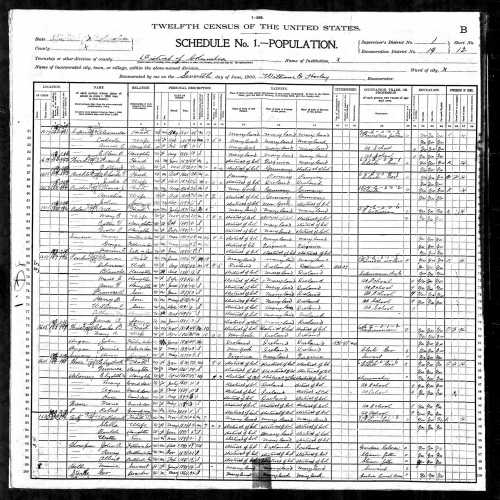 Last November, GM moved into a house on 33rd St. City records say the house was built in 1900, but that’s the default year the city lists when the house was built before 1877 or the city just doesn’t know when the building was built. But from a database GM has, he was able to identify that the original building permit was issued to a Mr. D. Haggerty in 1895 (if you’re curious when your house was built, drop GM a line). So GM’s home was built sometime around 1895, but what GM was really curious about was who actually lived there. And that’s where the Census comes in.

The Census records from 1930 and earlier are publicly available (responses to the Census are confidential for 70 years). Most of what these records get used for is to build family trees, which they can be invaluable for. And that’s why the best websites for accessing old census records are typically genealogical websites. GM uses a pay website, Ancestry.com, but a good free one is FamilySearch.org. The problem is that they don’t normally let you search the census records by address. So in order to find your house’s record, you need to learn how the forms work and how to browse them.

Start with this one from 1900. Right at the top is President William McKinley and his family. If you read down the left side you’ll see that the street is Pennsylvania Ave. The second column tells you what street number the house is (except that in this particular case, no address is listed, so maybe it’s not a great example, but you can see how President McKinley’s neighbors, the Morisi family at 1710 Pennsylvania Ave., have their house number listed).

Census records from this time period are organized by enumeration districts. Apparently you can get old maps from the DC Public Library showing you the old enumeration districts, which would come in handy, but GM has not been able to verify that. So it takes a bit of hit and miss to find the right enumeration district for your house. In 1900, Georgetown’s were 19-26. Go here and poke around.

As you may recall, Georgetown used to have different street names. The change happened in 1895, so any Census before that used the old street names and house numbers (but don’t go looking for the 1890 Census; most of it burned up in 1921). So unless you happen to know the old house number of your house, the 1900 Census is probably the earliest record that you can use with confidence.

So having said all of that, GM was able to find the 1900 record for his home*. It’s shown above. And the residents: the Soper family. This is what it tells us:

Unfortunately, this level of detail won’t be available for future generations; the Census stopped asking for it. Now they just ask for simple demographic data and no more.

If all of this is a bit confusing and you don’t know where to start, you ought to swing by the Peabody Room at the Georgetown Library and talk to Jerry McCoy. He has a file on a lot of Georgetown homes, so he might be able to tell you even more than the Census will.

*One more monkey wrench: the homes on the north-south streets west of Wisconsin and north of Volta apparently were renumbered sometime in the mid 20th century. So if, like GM, you’re in this situation, check your deed if you own your home, and see if it lists the old house number. That’s where GM found his.

One response to “Walls Can’t Talk But the Census Does”