As expected, DDOT is shutting down some roads to traffic tonight in anticipation of Halloween crowds. The restrictions are identical to those last year.

The governing theory is to keep traffic off the side streets (because of the kiddies walking around in the dark) and to push all the traffic onto M and Wisconsin. So even though it would be great for the partiers on M St. to shut the whole road down to traffic as they used to, this is probably a safer plan overall. Plus it has the benefit of allowing partiers to catch a cab on M St. and Wisconsin rather than off on a side street.

Here’s a map of the closings. The red streets are streets that are closed to everyone except residents and employees (if it’s a commercial street). The purple streets allow traffic but don’t have any on-street parking: 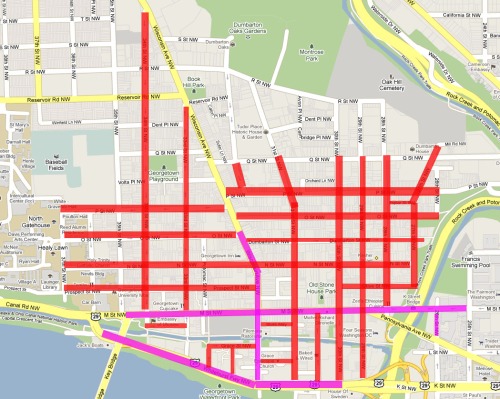