One of GM’s guilty summer pleasures is to read spy novels. This summer was no different, as he returned to John le Carré for a mid period book GM had previously overlooked: The Perfect Spy. The semi-autobiographical work tells the story of Magnus Pym who (spoiler alert) rises up through the British secret service while operating as a double agent for Czechoslovakia. And towards the end of the book Georgetown makes a cameo appearance.

The book is structured intermittently as a book-within-a-book as Pym writes a coming-clean narrative to his family and colleagues explaining his actions. At one point he describes his time in Washington where he lived with his wife in a small Georgetown home. And he explains to his son that one of the locations of the “dropboxes” that he used to communicate with his Czechoslovakian handlers was in Oak Hill Cemetery. Pym writes to his son Tom [it gets a little confusing because in his “book” to his family and colleagues, Pym refers to himself in the third-person. It’s the same tiresome affectation that GM uses.]:

He wandered Georgetown’s beautiful Oak Hill Cemetery and imagined he was with Dorothy at The Glades, confined to the dripping orchard where his guilty face could be hidden from the passers-by. Minnie Wilson was our letter box at Oak Hill, Tom. Our first in all America–go and take a look at her one day. She lies on a curled plinth a short way down the terraced bowl, a small dead Victorian girl in marble drapes. We left our messages in a leafy recess between Minnie’s backside and he protector, one Thomas Entwistle, who had died in later age.

The reference was so specific that GM was convinced that it must be a real place. So recently he headed over for a much overdue visit to Oak Hill and search for the gravestone.

GM immediately found several small sculptures of babies or children, but none with that name. He walked up and down looking, about to give up hope he finally spotted the name Thomas Entwisle (not Entwistle, like in the book).

Sure enough, behind Entwisle’s tombstone was another smaller one to Minnie Wilson:

The sculpture has eroded significantly over the years. Le Carré wrote A Perfect Spy in the 1980s, so he probably saw this grave near that time. But even if it were a decade or so before that, the sculpture was probably already quite degraded by the time he saw it.

The gravestone totters back against Entwisle’s creating the perfect cache for two spies. Again, given le Carré’s description, this condition probably has existed for quite some time.

Thomas Bailey Entwisle was born September 29, 1819 in Alexandria, which was still part of the District of Columbia at the time. He spent many years as a carpenter but eventually became a building inspector. Before he died in 1894, he lived at 3267 N St. in Georgetown.

One source GM found suggests that, as a carpenter, Entwisle built the Fifth Presbyterian Church at 5th and I St. (which is now the Chinese Community Church): 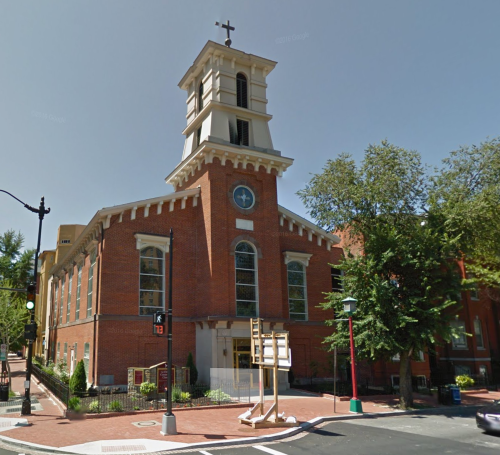 But GM couldn’t confirm that.

The same source states that Minnie Wilson was his daughter. If you look closely at the gravestone it appears to say “Daughter of Thomas B. and Mary Entwisle”. So her full name was Minnie Wilson Entwisle. She only lived just over ten months from August 1863 to June 1864.

Interestingly, in 1867 Entwisle lived at 298 H St. NW (a property long since demolished) only a few blocks from the church. GM wonders if Minnie wasn’t actually originally buried at Oak Hill. Even if Minnie’s grave stone were propped up, it still would be at an awkward location, on a steep grade right next to a path. GM wonders if she weren’t moved there after Entwisle moved to Georgetown (or perhaps after he was buried).

Minnie lived a short life but it’s somewhat heartwarming to think of her memory–however vestigial–living on into the 21st century.

One response to “A Spy’s Cache”