How the Old Georgetown Act Was Almost Gutted 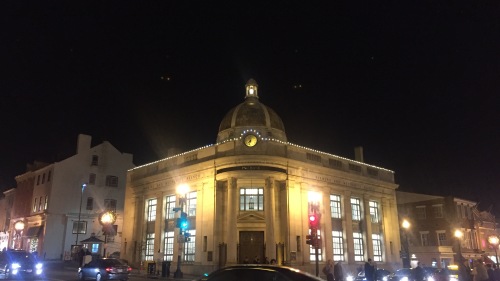 Anyone who wants to make physical changes to a building in Georgetown quickly gets to know what the Old Georgetown Board is, and how its whims can dramatically affect (or squash) the changes. Created in 1950 by the adoption by Congress of the Old Georgetown Act, the board is a group of three architects who give recommendations to the Commission of Fine Arts on any project that is forwarded to the CFA by the city due to it being within the boundaries of Old Georgetown. While the recommendations are not absolutely binding–and occasionally an applicant successfully wins an appeal from the Mayor’s Agent–they are virtually so.

The Old Georgetown Act was passed by Congress in 1950 in order to preserve the historic nature of Georgetown. The former city celebrated its bicentennial in 1951, and the push to preserve the physical shape of the old buildings had been rising significantly since at least the 1930s. (There are other less noble reasons behind that drive that you can read about here.)

The act gives authority to the U.S. Commission of Fine Arts to issue advisory opinions to the District government on building permits in Georgetown. And the Old Georgetown Board was set up as a junior organ of the CFA to specialize on the Georgetown applications. Generally the CFA simply rubber stamps what the OGB recommends (but not always).

The District Government Pushes Back

In 1957, an Assistant Corporation Counsel of the District government wrote an opinion that shocked Georgetown, and the greater preservation world. The opinion, written by Robert F. Kniepp and approved by the Corporation Counsel, Chester Gray, concluded that the CFA exceeded the authority granted to it by the act whenever it attempted to weigh in on non-historic structures. As the Post reported June 20, 1957: 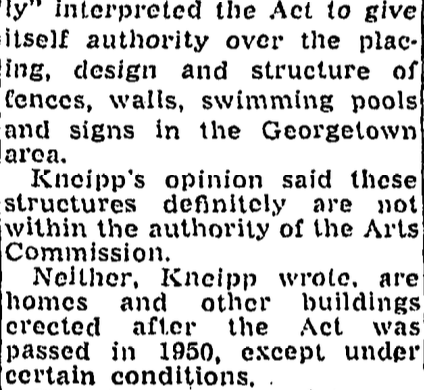 This interpretation would radically reduce the scope of review by the OGB and CFA. Needless to say, this alarmed the groups that had successfully lobbied Congress to adopt the act just seven years prior.

The residents even roped in a heavy hitter to argue on their behalf. Former Secretary of State, Dean Acheson, wrote a letter to the Progressive Citizens Association objecting to Kneipp’s opinion, as discussed in an Oct. 1, 1958 article in the Post (click to expand):

The gas station referenced in the article was discussed in an earlier article (Sept. 15, 1957), and was one of the more significant situations to occur during the period when the District government accepted the Corporation Counsel’s opinion:

(The best part is that the sign the gas station owner wanted erected said “We’re all shook up but you’re ‘welcome as always.'” This is probably an Elvis reference, seeing as “All Shook Up” was release in April 1957.)

As alarming as pop culture-referencing signs at gas stations are, what really frightened preservationists was the uptick in raze permits. The destruction of two buildings in particular alarmed the architects on the Old Georgetown Board. The board had ruled that the properties at 3033 P St. and 3053 M St. should not be torn down. But the District Commissioners, under guidance of Corporate Counsel, overruled their decision. The buildings were razed. (The P St. property became part of the West Lane Keys development built by A. L. Wheeler. And the M St. property opened up the driveway to build the parking lot next to the Old Stone House.)

In protest of these and other decisions, the architects on the OGB resigned: 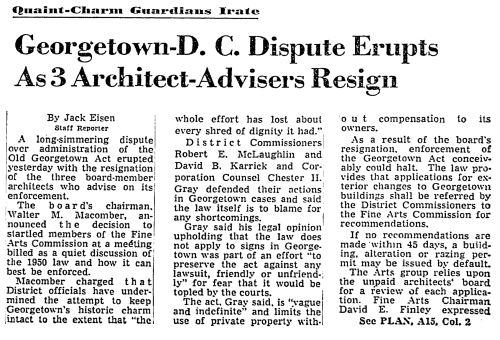 Even the Washington Post editorial board weighed in. Although what’s hilarious is that even in the 1950s, it was already cool to mock Georgetowners: 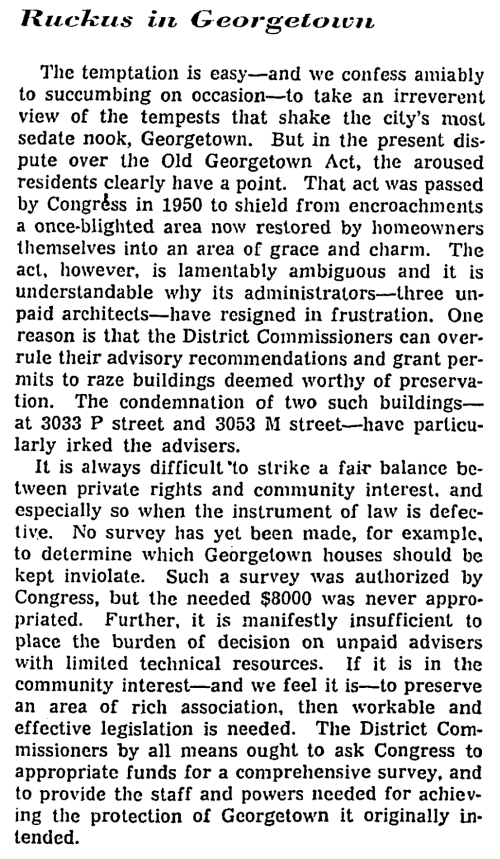 Attorney General to the Rescue

Ultimately salvation for the preservationists came in the form of an opinion issued by President Eisenhower’s Attorney General, William P. Rogers. He concluded in January 1960 that the Corporation Counsel’s opinion was without merit and that the Old Georgetown Act applied to much more than just historic homes existing as of 1950:

This did not completely end the push-and-pull between the District government and the preservationists. Throughout the years, multiple buildings have been razed due to demolition-by-neglect. As recent as a few years ago, an absentee landlord allowed the home at 3324 to fall into total disrepair and then sold the property to a developer who successfully obtained a raze permit. A rare 18th century building at 1220 Wisconsin Ave. was allowed to fall apart under the watch of Sidney Zoltnick, who then was able to obtain a raze permit in 1972. He built a fast food burger joint in its place.

But the Attorney General’s opinion shifted the battleground significantly. There was an effort in the 60s to rewrite the Old Georgetown Act to provide for more clarity, but that effort failed and the original act remains.

And that is the story of how the Old Georgetown Act was nearly gutted.

One response to “How the Old Georgetown Act Was Almost Gutted”