This Makes Us All Look Bad, Cut it Out 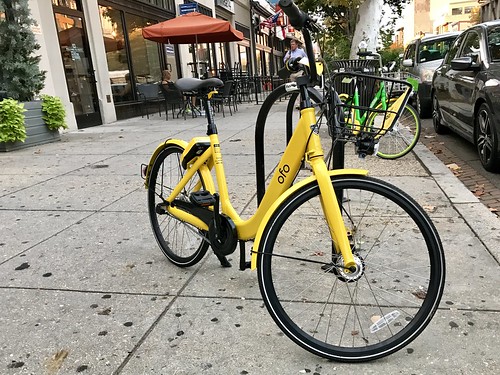 While GM was enjoying his holiday break, he was almost pulled back into service by a story that made all of Georgetown look bad. That story related to a small group of cranks discussing their efforts to thwart the city’s experiment with so-called dockless bikeshare providers.

Specifically, as reported by Martin Austermuhle of WAMU:

There's a lot of anger on the Georgetown listserv over dockless bikeshares, so much so that one resident admits calling the cops on people for merely using the bikes. (See below.) Another resident wants the attorney general to look into the companies. (For what? Unclear.) pic.twitter.com/ohexrAUg5s

Here are the two more egregious emails from the discussion:

At the community-wide meeting recently held about the experimental dockless bicycle program being run by DDOT Mr.. Sam Zimbabwe from DDOT advised that if dockless bikes were found which were illegally or inappropriately parked  that 311 could be called to have them removed.  I tried it the week after Mr. Zimbabwe made the announcement and the 311 operator with whom I spoke did not have a clue about what I was reporting and refused to take the report.  This morning I observed one of the Ofo bikes illegally parked in Rose Park and I called 311 to report it.  I’m happy to say that the 311 operator took the report as “an abandoned bike” report.  I received an e-mail confirmation of the report with a report number.  I will pass the report number on to Mr. Zimbabwe.  If you make such a report I would also suggest that you forward the report number to Mr. Zimbabwe.  His e-mail address is:  sam.zimbabwe@dc..gov.  I can’t believe that we have to waste City time and money, via the 311 system, on these ridiculous and unsafe bikes and I hope that the Attorney General’s Office will look into this program.

I have had to call 311 every night this week (leading up to Xmas Eve Sunday).
When I come home from work, the bikes are all over the sidewalk and in the street. An elderly neighbor hit her head on a bike as she fell, suffering a massive bruise.
These bikes serve no purpose whatsoever.
We have informed our neighbors to call 911 immediately when you see someone using the bikes, and to snap photos and videos of all individuals using the orange, green, yellow and now RED bikes.
I didn’t call the real police @911 when my neighbor slipped, but now whenever we see anyone (male or female) using these bikes, we call 911 and report “suspicious activity”
Provide a physical description of the rider
Color of bike
Direction of travel
And state the assailant suspect is “acting suspicious”
Since Sunday, we have noticed a DRAMATIC decrease since initiating these calls directly  to MPD 2D.

This pearl-clutching even made the national news. And the headlines simply write themselves: “Rich Georgetowners Don’t Like Outsiders and Complain Like Children to Keep Them Out”. This is an easy article for people to write because it only reinforces what every one already thinks about Georgetowners in the first place. It’s why against all evidence, people still believe racist Georgetowners thwarted a Metro station (they didn’t, although some, like Eva Hinton, took credit for doing just that).

It should not have to be stated–but apparently it does–that it is not ok to call 911 when you see someone do something entirely legal just because you don’t like that they are choosing to do the thing you don’t like them doing. In fact it is itself a crime.

Calling the police to report that someone riding a bike you don’t like to report that he is acting suspicious and is a goddamn “assailant” is repulsive behavior and you bring us all shame to call us your neighbor.

An equal number of people wrote back on the listserv to object to the original emails, which is somewhat heartening. But the gentle pushback is only getting its shoes on by the time the Georgetowner cliché is literally halfway around the world.

It’s ok to not like the dockless bikeshare pilot. You might just be the type of person who hates bikes. Or maybe you don’t hate bikes, per se, but just don’t want to see the bikes on the sidewalk. There are definitely kinks to work out. Maybe all dockless bikes should have to at least lock to something (the Jump bikes already require this)? Maybe one parking spot of every block should be converted to a bike rack? There are problems, but there are also solutions. Above all else, the place you should be lodging your complaints is DDOT, not the police.

Trying to sabotage the pilot by illegally wasting the time of 911 call center employees and police officers is not acceptable. When you do this, we all look bad. Cut it out.

One response to “This Makes Us All Look Bad, Cut it Out”