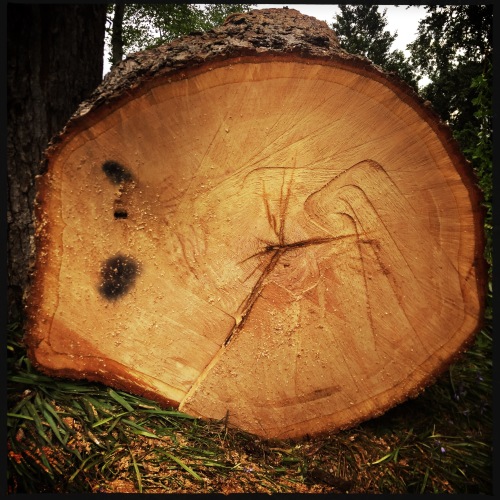 Dumbarton Oaks recently cut down a massive white oak. As a sign near the carnage explained, the tree was too sick to remain and posed a danger if it were left up.

The photo above doesn’t quite do this tree justice. Here’s GM’s daughter next to another of the slices, for some perspective: 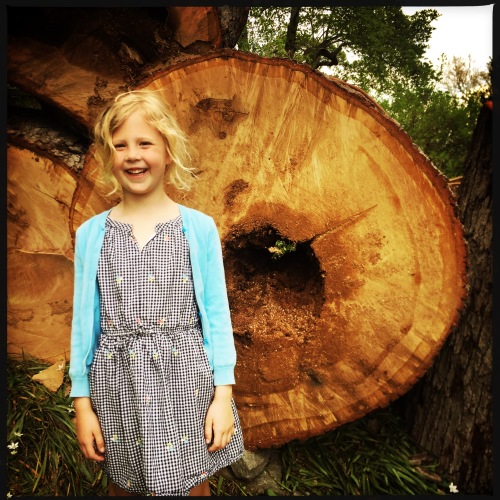 From GM’s rough counting of the rings, the tree appears to have been between 100 and 130 years old. This is actually not particularly old for a white oak, which can in some circumstances live over 400 years. But it’s still a sizable loss for an estate named after it (and others of its kin).

If the age estimate is correct, the tree was planted long before Harvard took over Dumbarton Oaks, and before even the Blisses, who gave the estate to the university.

It probably isn’t as old as when John Calhoun lived there, but it could have been from when Edward Linthicum owned it (1846 – 1891). If not then, it would have started growing under the man who bought it from him, Henry Blount (who sold the property to the Blisses in 1920).

It’s always sad to see such a massive tree come to an end. But the best way to honor it is to plant another tree.