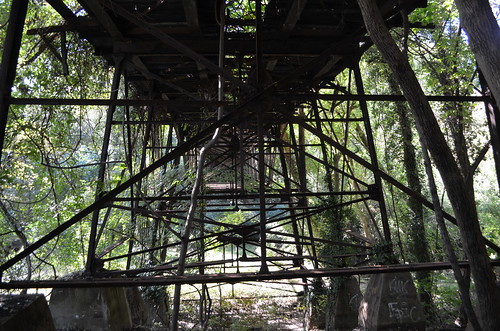 Here’s the report (just read the Executive Summary if you want the highlights):

View this document on Scribd

The study came from an effort to take the existing right-of-way that the city has through the Palisades (which once was where the Glen Echo Trolley went) and rehab it to be better suited for pedestrian and bike use. By bringing the trail all the way to Georgetown, it would provide a much needed non-auto connection between the neighborhoods.

There is an urgency in the study since the Foundry Branch Trestle Bridge (that bridge in the woods just west of Georgetown University) is falling apart. It’s currently owned by WMATA, who wants to tear it down unless the city takes it off their hands. The study was done so that the city could be confident that they could actually use it after receiving it from WMATA.

Some of the highlights of the study are that, as mentioned above, DDOT recommends bringing the trail into Georgetown via the bridge. The other option was sending trail users down to Canal Rd.:

At the east end of the bridge it would then have to travel over the southern entrance of Georgetown University on the new bridge and then end at Prospect St. This is how it could look:

This would recreate a bridge that once stood here to carry streetcars from Georgetown out to the Palisades. The Hoya Saxa mural is painted on what was the western abutment of that bridge.

While the transportation department recommended this alignment, it acknowledged that some have expressed opposition to it. None more than Georgetown University, which apparently is against the bridge and doesn’t want people crossing a small corner of their campus as they leave the trail and continue on to Prospect St. (Keep in mind this is a university that is quick to tout that they certified a “bike friendly university” and also their existing campus plan requires them to work with the city to have this trail built.)