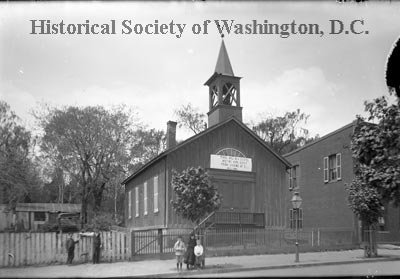 This week on Georgetown Time Machine, GM is visiting a scene he (sort of) sees every single day: the Market Street Presbyterian Church.

The photo is from the Historical Society of Washington, DC, and was taken between 1900 and 1910. It shows the former Presbyterian church that stood on Market St. (now 33rd St.) between 4th (now Volta) and 5th (now Q).

The church used what is now Volta Park as its burial grounds. There are probably thousands still buried there, and probably under nearby homes too. As recently as 2012, human remains were found at a property across Q St. from the park.

It’s still there, sort of! He’s what it looks like now: 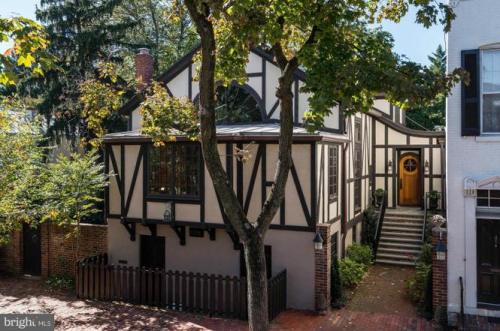 The church was converted to residential use in the 1930s by Karl Ernst, brother of famous German painter, Max Ernst. It was he who added the Tudor faux half-timbers that give the home its distinctive look. He did the construction himself, which became apparent to the owners in 2012 when they went to gut and renovate the house. The work lasted a long time, but apparently the work was fairly sloppy.

At the time of the renovation, the owners asked the Old Georgetown Board if they could remove the Tudor look, which was clearly not original, and return to the original look. Their request was rejected and the Tudor design remained. Much like the dead bodies…