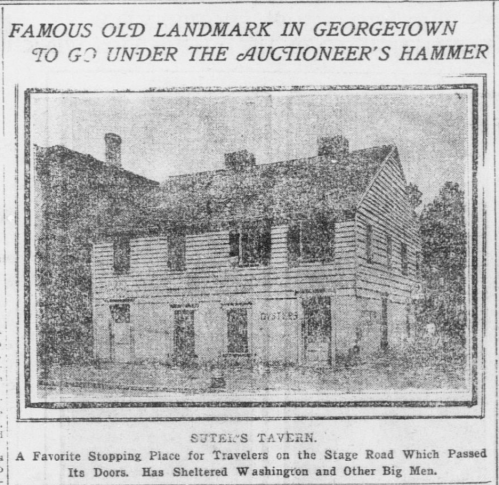 This week for Georgetown Time Machine, GM is traveling back over 100 years ago to examine a building claiming to be one of the more important buildings in Georgetown’s history: Suter’s Tavern.

The photo comes from a Washington Times article from 1905 concerning the auction of two homes at 3101 and 3103 K St. The photo, however, was not taken in 1905. It is a mid-19th century photo, presumably of the same buildings. The article describes the old photo without question as Suter’s Tavern. But there is reason to doubt it.

Why would anyone care to claim a building to be Suter’s Tavern? Because was a legendary establishment in early Georgetown. Known also as the Fountain Inn, it was the first stop for stagecoaches in Georgetown. And most famously it served as the location of George Washington meetings with Pierre L’Enfant and Andrew Ellicott to plan the new capital city across Rock Creek. (Read here for an exhaustive history of the tavern).

The text of the article raises some questions as to whether the houses up for auction are really Suter’s Tavern. But it settles on it being genuine: 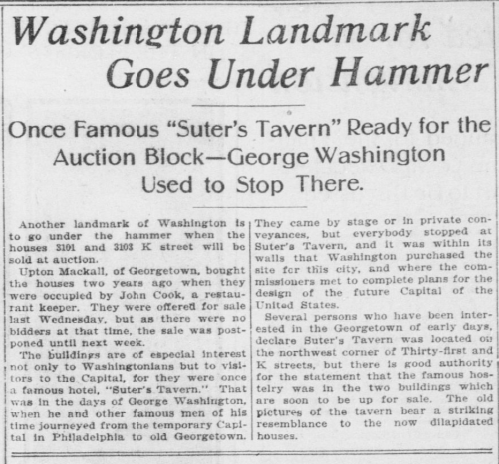 But there’s reason to doubt that the mid-19th century photo accompanying the article is even of Suter’s Tavern. Apparently the photo is from the Library of Congress, but on the back is penciled “Suter’s Tavern?” And the 1973 article linked above makes a compelling case that the original Suter’s Tavern was likely torn down by the 1830s, well before the photograph.

Ironically, by the mid 20th century, Georgetowners were fairly convinced that actually the Old Stone House was Suter’s Tavern. This is likely because John Suter Jr. owned it at one point. It definitely was not, but the misconception helped prevent the building from ever being torn down. And it was bought by the National Park Service before the error was discovered. As a result it is the oldest unchanged building in DC.

It’s unclear where exactly Suter’s Tavern really stood, but it was likely somewhere along K St. between Wisconsin Ave. and Thomas Jefferson St. But it almost certainly wasn’t put up for auction in 1905. And either way, it’s long gone now. But funnily enough, a new restauranteur is planning on opening a new tavern in Book Hill with the Fountain Inn name. GM’s always happy to see truly old Georgetown history revived!