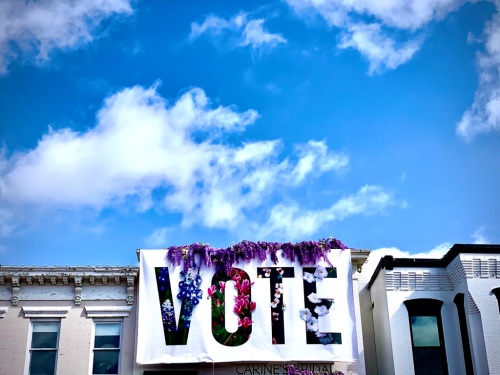 The streets were filled with honking and cheering Saturday afternoon as word of the election results spread: Joe Biden will be our next president.

And for most people, that is all they need to know about the election results. But if you’re curious how the local races turned out, and how Georgetown voted in both the local and national elections, read on.

Unsurprisingly, Joe Biden won the most votes for president from Georgetown. He won Precincts 5 (east Georgetown) and 6 (west Georgetown) with 84% of the vote. That’s below his citywide tally of 93%, reflecting the higher Republican presence in the neighborhood. Trump won 13% of the vote. Do what you will with the fact that there are, in the year of the Lord 2020, nearly 600 Trump voters in Georgetown.

As for local races, sitting Ward Two Councilmember Brooke Pinto easily won election to a full term. She won 69% of the Ward Two vote against her closest rival, Dupont ANC Commissioner Randy Downs, who netted 20%. In Georgetown, Pinto racked up 77% of the vote, which echoed the strong Georgetown performance that helped her win the primary back in the spring.

Georgetowner Allister Chang won the Ward Two seat on the DC State Board of Education, winning 53% of votes from Georgetown, and just shy of 50% of votes Ward-wide.

I am clearly biased, but my own race is probably too close to call. Jenny Mitchell is ahead right now 239 to 226. But the Board of Elections is still counting the mail-in and drop-off ballots and any special or provision ballots. If the same number of people voted in the race this year as they did in 2016, the last presidential election year, then roughly 90 votes still need to be counted. So it could go either way. And if it gets really close, then we won’t know who won until November 12th, the last day the Board of Elections will accept ballots postmarked by election day. Either way, though, the SMD will be in good hands.

Finally, Georgetowners are down with psychedelics, approving Initiative 81, which instructs the city to deprioritize the criminalization of magic mushrooms.