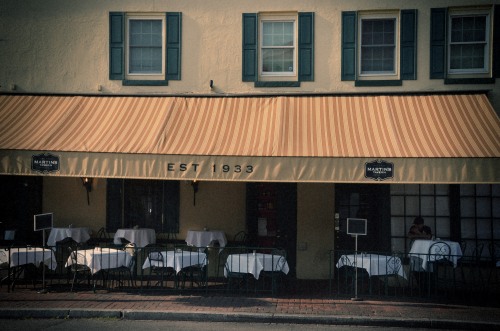 This time last year, GM was discussing how the relatively new pandemic would impinge on your ability to celebrate St. Patrick’s Day. And while he is not about to tell you that you can enjoy it as you might have in the past, things are looking brighter on several fronts. And there’s nothing more Irish than to look for the bright side of a dark cloud. So without further ado, here is a slightly modified version of GM’s annual St. Pat’s article giving you a guide to enjoy the day around Georgetown:

As you may know, during the early 20th century, parts of Georgetown were heavily Irish. The center of it was on the west side, close to the Catholic landmarks of GU, Trinity and Visitation.

The Irish concentration is long gone, but with the help of old photos you can imagine the ghosts still walking the streets. In the 30s, photographer Carl Mydans walked through the poor and heavily Irish blocks of west Georgetown and captured the scene of children treating the sidewalks as their playroom:

And while you’re strolling through west Georgetown, it’s always nice to swing by Holy Trinity Church. And you know who else has been doing that recently? Our country’s second Irish Catholic president. If you’re really in for a walk, why not take this walking tour charting the first’s life in Georgetown.

Next you can walk up to Holy Rood Cemetery on Wisconsin. This lovely spot is the final resting place for generations of Georgetown’s Irish Catholics. Just stroll the rows of headstones and you’ll see dozens of Sullivans, O’Conners, Fitzgeralds, and so on. And after decades of shameful neglect, Georgetown University has poured a huge amount of effort into restoring the cemetery. If you haven’t visited recently, now’s a great time.

Finally, take a stroll back down Wisconsin to a living testament to Georgetown’s Irish past: Martin’s Tavern. You can’t raise a Guinness at the bar quite yet, but you can sit outside and lift a few. Sláinte!