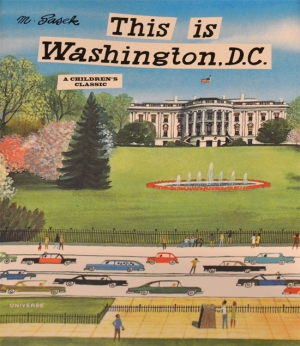 Being a proud District resident and a new father*, GM recently picked up a copy of the classic “This is Washington, D.C.” by M. Sasek. Browsing the book, GM saw that Georgetown gets a couple pages, and it’s pretty funny:

Georgetown is the oldest part of Washington, a district of beautiful old houses as well as of cozy small taverns and bookshops; an exclusive residential area and also an artists’ quarter. Georgetown used to be a port. It is the eastern terminus of the Chesapeake and Ohio Canel. By the way, it is named for George II, the British king, not George Washington, the American president.

Some of this was true and still is, some was true and isn’t anymore, and some may never have been true (historians can’t decide whether Georgetown was named after George II or George Beale or George Gordon, or all three). There still are some “cozy taverns” but there are probably fewer than there used to be. We all know the sad state of Georgetown bookshops…

It’s the “artists’ quarter” that caught GM’s eye. GM went into this a bit a while back when he wrote about the infamous Hamilton Arms:

According to written accounts, in its salad days the property contained the Hamilton Arms Coffee House. The coffee shop was built in 1939 by Milo Brinkley, Mary’s father. He wanted to recreate a European-style village and thought it needed a gathering place. The community and the coffee shop eventually attracted early beatniks. And speaking of salad, the coffee shop was supposedly the site of the first salad bar in the District.

Oh, and in the 1950′s it was supposedly the location of Georgetown’s first pot-party. END_OF_DOCUMENT_TOKEN_TO_BE_REPLACED 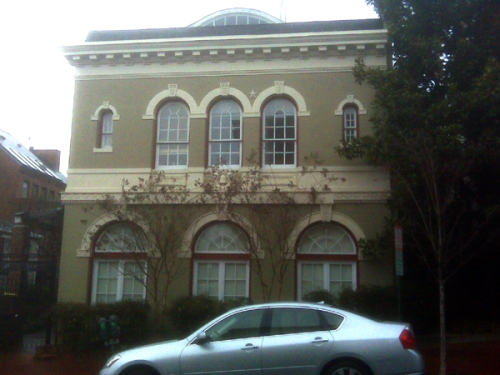 Think Georgetown in the 1950’s and 60’s and most people think of JFK and socialite doyennes.  Almost totally forgotten from those days in Georgetown is a coffeehouse and a community of beatniks and free-spirits once located in a small courtyard off 31st st. Nowadays it’s the office complex called Hamilton Court at 1232 31st. St. Find out the wine-soaked pot-scented history of this perfectly ordinary looking office complex after the jump: