Survey of Historic School Buildings in Georgetown: The Wormley School 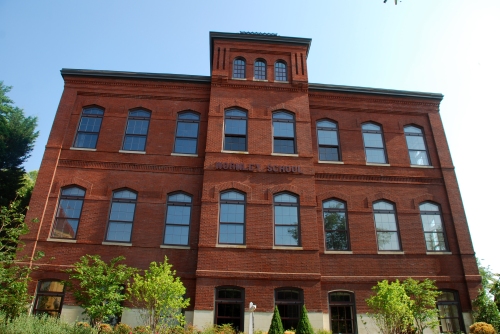 As part of GM’s continuing series on the historic school buildings in Georgetown today he explores the historically significant Wormley School.

Brief Story: The Wormley School was built and opened in 1885.

It was built specifically to educate Black children and was named in honor of James Wormley, a prominent African-American from Washington who lived from 1819 to 1884. Among other ventures, Wormley ran the Wormley Hotel at the corner of 15th and H. Its proximity to the White House made it a perfect location for secret meetings between the Tilden and Hayes factions during the great election controversy of 1876.

There’s a bitter irony that Wormley’s hotel was the location of the secret deal to end the election controversy. Wormley was a vigorous advocate for the improvement of education for Black children. His efforts helped towards the creation of publicly-funded schools for Black children. The irony, of course, is that the secret deal between the Hayes and Tilden camps called for the Democrats to allow Hayes to win the Presidency in exchange for a promise to end the Reconstruction of the South, thus forever altering the fates of generations of Southern African-American children.

The Wormley School itself faced controversy early in its existence. The immediate neighborhood around the school was predominantly White and the children mostly traveled to the school from the predominantly Black neighborhoods in East Georgetown. In February of 1889, the School Board floated plans to move the school population to a newly constructed school on Olive St. (what would become the Phillips School). The African-American population mostly fought this proposal. The Olive St. location was believed to be unhealthy due to its dampness and proximity to Rock Creek (and its apparently Malaria-causing mosquitoes). Some voices, however, were in favor of the move citing the location’s nearness to the students’ homes and the fact that a White school had existed at that location for quite some time, and those students weren’t getting sick.

Regardless, the move didn’t happen.

The school remained opened and segregated until it was closed in September of 1952. The building was turned over for use as offices by the Board of Education in 1953, although it was occasionally used for night classes after that point.

Almost all evidence found by GM suggests that the Wormley School stopped being used as an elementary school at this point, although there is at least one reference that suggests the building was used to teach developmentally disabled children circa 1979. Anyone know the full story?

In a clear example of DC governmental incompetence, the building was sold to Georgetown University in 1998 for $1.5 million without a reversion clause. This transaction turned out to be golden for the University, as it did nothing with the school for seven years and then sold it to a developer for $8 million in 2005. Say what you will about Williams and Fenty, but at least they learned to cut out the middleman when they sell historic school properties to developers.

As discussed here before, the Wormley School became “Wormley Row” an extremely overpriced and undersold condo development that remains half built. Not exactly a grand testament to the successful businessman and courageous advocate that was James Wormley.

One more interesting tidbit: When researching this, GM came across an interesting rule that used to be on the books of the Board of Ed. It was Rule 45 and it stated that any woman teacher who gets married must be fired. It didn’t prevent already married women from working as teachers, just those who got married while already teaching. The rule was thrown out by the DC Court of Appeals on June 1, 1916. But guess who was among the group of people advocating for the rule’s reinstatement in 1923: The Georgetown Civic Association.

6 responses to “Survey of Historic School Buildings in Georgetown: The Wormley School”