Survey of Historic School Buildings in Georgetown: The Fillmore School 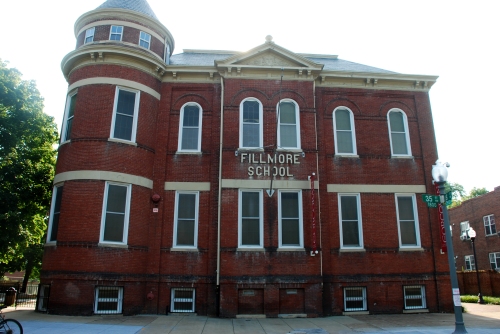 It’s been a while since GM added an entry to his Survey of Historic School Buildings series, but today he inches closer to checking off all of them: the Fillmore School.

Before getting too far into the discussion, GM would like to first address the jurisdictional question: yes the Fillmore School is in Georgetown. Barely. According to federal law, the Georgetown historic district line runs down the middle of 35th st. between Reservoir Rd. and Wisconsin Ave. So Fillmore is in Georgetown, the homes across the street are (technically) not. Subject matter jurisdiction established.

The Fillmore School was built in 1893 and named (presumably) in honor of our last Whig and most comically named president: Millard Fillmore. It was built to serve upper Georgetown’s white population. Ultimately it would be Burleith’s local elementary school too, but most of Burleith was completely undeveloped until the 1920s.

GM searched the Washington Post archives for stories about the early years of Fillmore, and only came up with a handful of tidbits. In June 1894, the teachers and students of Fillmore gave a concert at Western High School, which was then located in the Curtis School (which used to be next to Hyde). The program included pieces by the Sawyer Fife and Drum corps. and the Mother Goose Cantata.

In the very early morning of September 15, 1901, a fire burned down the stables that were behind the school. According to the Post, the flames could be seen all over Georgetown, which drew a large crowd.

In 1910, the school was awarded first place in an interscholastic athletics contest run by the Washington Playground Association. The award was given to the school at the Georgetown Playground (now Volta Park). The award was accepted by Supervising Principal for the Second Division Prof. B.T. Janney, who was standing in for the Supervising Principal of the First Division B.W. Murch.

In the Spring of 1914, Western High School suffered a large fire. Fillmore was commandeered to house many of the high school students until the building could be repaired. This led to a lot of consternation by the parents of Fillmore children who were forced to walk all the way down to the other Georgetown elementary schools. In the fall of the following year the Post reported on an effort by the Fillmore Home and School Association to argue that the high school students should be sent to one of the lower elementary schools instead since they were closer together and thus the displaced students wouldn’t have to walk as far. They weren’t successful.

Like the other elementary schools in Georgetown, Fillmore faced dwindling enrollment numbers starting in the middle of the 20th century. In 1957, District Superintendent Hobart M. Corning proposed closing Hyde School since it couldn’t maintain the desired 30 pupil per class number and distributing the remaining students to the Jackson School and Fillmore. An organized effort saved Hyde by introducing a busing system to bring children from crowded schools across the city to the empty schools in Georgetown (the grandfather of today’s out-of-boundary system).

This move saved Hyde, and bought a few more decades for Jackson and Fillmore. But by the 1970s the ax was preparing to fall again. Jackson was closed in 1971. But in 1974, the school system proposed closing Hardy and Fillmore and using them as office space. In response, six schools in the area banded together to present an innovative plan to the city. They were Fillmore, Hardy, Hyde, Key, Mann, and Stoddert. Four would remain open as elementary schools (that’s Key, Hyde, Mann and Stoddert), Hardy would become the designated Middle School, and Fillmore would become a jointly used arts center.

Last year the Corcoran entered an agreement with East Banc to sell the building. East Banc planned to convert the building into condos and to construct townhouses on the playground. A nascent opposition movement grew in Burleith (mostly to preserve the playground) but before it got too far the deal was called off. GM hasn’t heard anything since.

4 responses to “Survey of Historic School Buildings in Georgetown: The Fillmore School”