As mentioned briefly the other day, a commission of volunteers has been putting together a plan for how to redraw the ANC district boundaries to reflect the new census numbers (those districts are called “single member districts” or “SMDs”). Two competing plans have emerged from the committee, although only one has gained a majority of support.

The plan that received majority support on the commission has been dubbed the “co-chairs’ plan” since it was produced by the co-chairs of the commission, Ron Lewis (chair of the ANC), Jennifer Altemus (President of CAG), and Lenore Rubino (President of the Burleith Citizens Association).

Their plan makes only a couple significant changes to the current map: 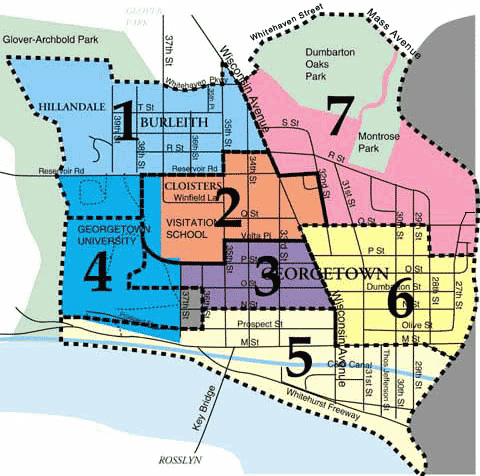 The biggest change to the old map in the co-chairs’ proposal is that all the dorms will be put into two districts. Currently, the dorms are spread out across four different districts, only one of which is “student only” (SMD 4). By putting all the dorms into two districts, the plan would guarantee two student commissioners. (Both plans call for a new eighth commissioner to account for the fact that the ANC population grew about 800 people.)

SMDs 1, 4, and 8 are way too large and SMDs 2, 3, and 5 are too small. The co-chairs are hanging their hat on the provision of the redistricting law that allows for deviation outside the guidelines if:

Essentially the theory is this: Burleith is a historic neighborhood different than Georgetown, so it should get its own SMD despite the fact that it’s too large. Second, the campus is a contiguous area with one particular type of resident, so it should be covered by its own SMDs. The other SMDs are, as a result, going to have fewer residents, and there’s nothing that can be done about that.

The competing plan has been dubbed the Flanagan Plan due to the fact it was drafted up by committee member John Flanagan, a GU student. His plan doesn’t deviate dramatically from the current map either (other than changing up the numbers unnecessarily).

The most significant difference is that the Flanagan plan puts the two student-only districts behind the gates (i.e. west of 37th St.). He then puts the dorms that are outside of the gates into what is currently SMD 3 (minus several blocks of single family homes). The intent is clear: to use the large population of students in dorms outside the gates (about 1,100) to gain a third student seat.

The Flanagan plan has the benefit of producing more compliant numbers, the largest district is 2,200 exactly and the smallest is 1,964.

The central principal guiding the co-chairs’ plan is that no student should be represented by a non-student, and vice-versa. GM recognizes that all things being equal, this is probably a worthy aim. In practice, non-student commissioners have completely ignored their student constituents. GM doubts the students would be any different. And this isn’t just GM’s speculation, studies have shown that all elected officials are like this.

In part it is due to mutual hostility, but it’s mostly due to simply not having a practical way to interact.

But in this country, we have a pretty clear legal principal of one man, one vote. How that principal has been applied is that when drawing representational districts, the districts have to be proportionate with each other. In other words, each member of a particular legislature has to represent roughly the same number as his or her colleagues. In GM’s opinion, the co-chairs’ plan doesn’t comply with that principal. So some commissioners would be representing up to 55% more residents than the others. Yes, the redistricting law allows some deviation for “neighborhood cohesiveness”, but this is taking that exception and making it the rule.

As mentioned above, the co-chairs’ central concern is that no West Village non-student is represented by a student. This is politics, and they’re allowed to hold this goal. But if they care so much about this goal, they should go back to the drawing board and draft up a map that produces that without having such skewed numbers. The obvious way to do that would be go back to the old model of having some dorms broke off into the “non-student” districts. It would mean moving a couple hundred students each into SMDs 2, 3, and 5, which is probably not enough to actually result in students winning those districts.

It would be an ugly map. It would mean some students getting ignored for ten more years. And students wouldn’t like it, but it would be legal.

And the final choice would be between a plan that would result in students getting ignored, or a plan that would result in non-students getting ignored. It’s a crappy choice but it would be an honest one. And it would accurately reflect the fact that on campus students represent approximately 31% of the ANC’s population. And 31% of 8 is 2.5. Do we round that up to 3, or down to 2? That’s the choice.

However, next week at the ANC meeting, only the co-chairs’ plan will be presented for public comment. The ANC doesn’t plan to take any formal action on it, so all it will be is a venting session. In the end, the decision will be up to Tom Birch, who was appointed by Jack Evans to recommend a final plan for all of Ward 2. Jack Evans will take it back to the Council, and more likely than not it will be approved. GM doubts any changes will be made to the co-chairs’ plan between now and then.

17 responses to “Competing Redistricting Plans Propose to Carve Up Georgetown”