ANC Round-Up: We Can Work it Out Edition

“Life Is Very Short, and There’s No Time For Fussing and Fighting My Friend”

Last night the ANC met for its April session and near the top of the agenda was a possibly significant development regarding the campus plan issue. A couple of other items grabbed GM’s attention as well.

Ron Lewis introduced the campus plan development by inviting to the podium Erik Smulson, GU’s VP for Public Affairs, Jennifer Altemus, CAG’s President, and Edith Cecil of the Burleith Citizens Association. These are the primary parties currently locked in the never-ending campus plan fight which is currently under review by the Zoning Commission. The joint message the four groups gave is that they are taking serious steps toward mediating a resolution to the fight outside of the Zoning Commission’s process. Zoning Commission chair Anthony Hood has repeatedly expressed a wish that genuine mediation between the parties would take place, and this appears to have finally started.

The groups filed a joint request to delay the Zoning Commission’s upcoming meetings on the plan by 60 days. During this time the groups hope to reach a negotiated resolution. What terms are on the table? GM has no clue (full disclosure alert: GM is the Secretary of CAG, but as he’s mentioned in the past, he isn’t really involved in this process and that hasn’t changed with this development) . And Ron Lewis wasn’t giving any promises that a resolution could be found. But that said, it’s an encouraging sign for those of us that just want this issue behind us and don’t want to spend the next 8 years until the next plan litigating the current one.

While we’re on the topic of Georgetown, sometime after the announcement on the mediation the University was back up to discuss its proposed new athletic training facility. The school apparently scaled back the size of the project somewhat and need to obtain fresh zoning approval.

The ANC began by discussing how it’s the commission’s general practice to support projects for which the school has already obtained approval under the campus plan, as is the case here. Notwithstanding that general support, the ANC was critical of the reduced scope for the project and challenged the school to incorporate more mixed uses into the project (i.e. dorm rooms).

GM’s not a GU athlete (obviously) but if he were, he might be a bit peeved about how much space in the new building is being dedicated to just a few athletic teams. In particular, the men’s and women’s basketball team appear to be receiving the bulk of the new space. Sure, these teams are probably the most high profile of the school’s teams, but it does seem like all the other sports are getting short shrift (particularly the tennis teams who are losing their courts). But like GM said, he’s not a GU athlete.

The reason for the limited scope of the project can be explained in one word: money. The school can probably raise oodles of money quickly (at least relatively speaking) for the basketball program. That’s not the case for the “lesser” sports and it’s even less the case for dorms.

The one thing GM particularly likes about the plan is that the majority of that surface parking lot will be removed. 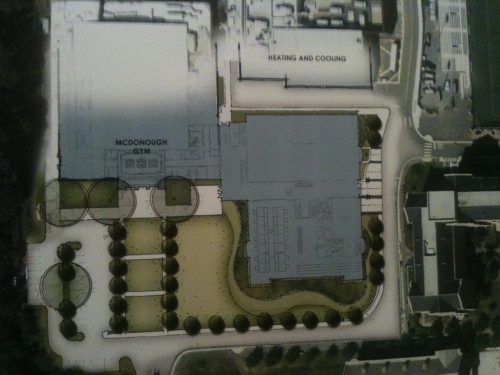 A couple years ago, DDOT floated some fabulous plans to extend the Dupont-Rosslyn Circulator bus route up to U St. This would be a great addition since there really is no convenient bus route connecting the U Street corridor with Georgetown. The plans also contemplated a bus line that would go from Georgetown to the National Mall. Also great, although probably less useful to residents as opposed to tourists.

But these ideas never got beyond the planning stage because there was never money set aside to buy the new buses necessary. The ANC passed a resolution calling for the city to allocate money to this project. It’s far from a guarantee that money will be found, but sometimes just asking for something is a good way to get something.

The ANC took up the question of Percy Plaza. After a strong introduction by Bob vom Eigen of the Friends of Georgetown Waterfront Park, the ANC was ready to quickly support to effort. But Tom Birch raised an interesting question. He supports the renaming, but he worries that simply throwing up a few street signs isn’t enough to truly “rename” the intersection. He urged the groups involved to explore creative ways to more strongly brand the area as “Percy Plaza”.

GM thinks this is a great idea, but signage is probably the wrong tool for the job. The problem is that the intersection feels like an intersection, not a plaza. You need to make it feel like a “place” if you want people to notice what the place’s name is. That means making significant changes to the physical road layout. One idea that jumps quickly to GM’s mind is to cover the intersection with a different surface, perhaps large pavers. You need to make people notice the road, not the signs; then they’ll actually call it Percy Plaza.

5 responses to “ANC Round-Up: We Can Work it Out Edition”