Are Your Alley Lights Glaring?

Last November, GM moved into a new home that has an alley behind it. He quickly realized that the alley lights (one of which is shown above) get awfully bright and glaring at night.

As you can see from the photo, the light had a glass “bulb” that hung below the hood. It lit up fully, so it gave the effect of a hanging bare light bulb in an otherwise unlit room.

GM was resigned to just live with the nightly glare, but then he heard at the most recent ANC that if you are unhappy with your streetlights, DDOT will attempt to mitigate the glare. So GM wrote Ron Lewis, his commissioner, and about a week later brand new lights were installed: 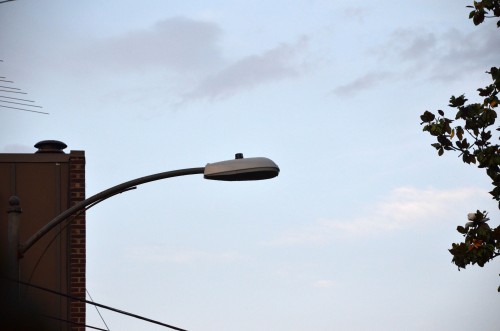 The new lights actually make the alley itself brighter, but without the exposed glass “bulb” the light is more directed downward rather than sideways. It still creates a less than romantic atmosphere in the garden, but the glare into the house itself is significantly reduced.

So let it be known: if your alley lights are glaring into your bedroom at night, give your commissioner a call!

3 responses to “Are Your Alley Lights Glaring?”