One of the hobbies GM has been looking forward to exploring once he got a yard of his own is gardening. Last November, he finally got his small slice of green and since this spring he’s been scurrying away trying to make something of it.  But he’s quickly realized that gardens take an awful lot of water. And that deluge started to seriously inflate his water bill. So rather than see his bills get higher and higher, GM decided to do something about it while helping the environment to boot: install a rain barrel.

This weekend GM headed out to Frager’s on Capitol Hill to pick one up. Other stores, like Johnson’s in Tenleytown, sell rain barrels, but the advantage with going to Frager’s is that they only carry rain barrels that have been specifically approved for the DC rebate program. Under this program, the city will pay you back $50 if you buy a rain barrel up to 75 gallons. It will pay you $100 if you buy an even larger one. (Another reason to go to Frager’s? It’s the coolest hardware store in the city.)

GM ended up with the 50 gallon Rain Wizard from Good Ideas:

As you can see from this photo from the company, this barrel is designed to have the downspout pour right into the top of the barrel. Many of the rain barrels you’ll see around are designed this way. This isn’t actually how GM wanted to install it because once the barrel is full it just spills the water out through the over flow hole. This is fine if you have your barrel sitting in a garden bed, but if you don’t want water splashing out around your barrel, you’ll want to get something like this: 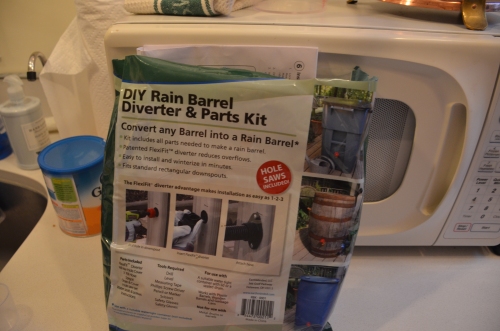 This kit, which is available at Frager’s, allows you to divert all overflow back to your downspout. This kit also provides just about all you need to turn any barrel into a rain barrel. Of course the draw back to using just any barrel is that you might not get the DC rebate. Nonetheless, this kit is worth picking up since most rain barrels don’t come with anything to connect your barrel to your downspout.

Installing the barrel was very easy. It just took about 30 minutes and required a power screwdriver.

First GM identified the perfect spot for his barrel:

It’s a nook on his deck right next to the downspout.

Then GM took the hole cutters in the kit and cut a hole in the barrel and the downspout (warning: cutting a hole in a metal downspout is loud). He then connected the two holes with a hose provided in the kit. That’s pretty much it:

GM woke up Monday morning and was surprised to see that it was raining. He was even more surprised to come out and check the barrel and find it completely full. (The hose was also leaking a bit, so GM’s got some tweaking to do).

And after that small storm filled the reservoir, GM hooked up the barrel to a hose and tried it out: 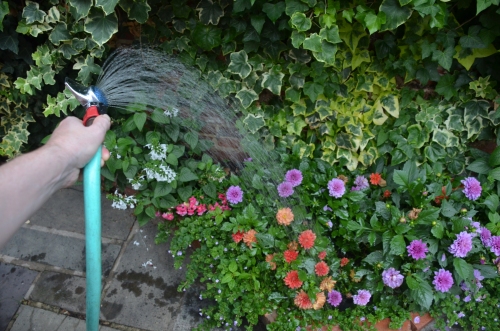 Voila. Free water. Now GM can let his garden really soak and not feel guilty about his water bill or the environment.

GM’s deck is elevated about 6 feet above the garden, so there is more pressure coming out of the barrel than if you kept the barrel at ground level. Even still, it’s only about 60% as much pressure as you’d get out of a house spigot. But it’s enough. If you need more you can buy a small electric pump.

7 responses to “Harvesting the Rain”