Counting Georgetown: Getting to Work

Today, GM digs back into the recently released American Community Survey results issued by the Census Bureau. Specifically, GM is going to explore one of his favorite topics: transportation.

Last year, GM reported that the numbers showed a dramatic reduction of Georgetowners driving to work and a smaller, but still significant, jump in transit use. He is somewhat sorry to say that some of those trends reversed themselves this year.

Here are the year to year comparisons:

The driving totals went almost back to where they were in 2009 and the transit cohort shaved off a few percentages. “Other” is up pretty significantly, which probably reflects the growing numbers of bike commuters.

Before you jump to a conclusion that something happened in 2011 to change people’s behaviors, remember that each of these results reflects a running five year average. So when the 2011 numbers say 23.05% of Georgetowners took transit, it’s really saying that from 2007 to 2011, an average of 23.05% of Georgetowners took transit. So while shifting up a year would affect that somewhat, it’s not a “snapshot”.

The long term trends, though, are still towards transit, walking and “other” (which, on top of biking, also includes motorcycling, Segwaying, and whatever else doesn’t involve a car or public transit.) 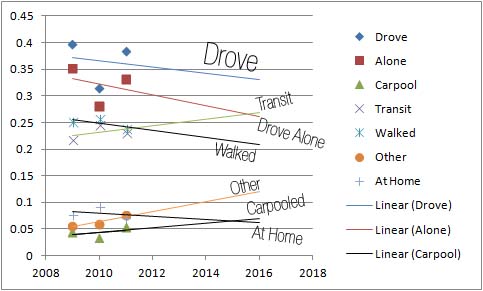 Again, this is very rudimentary, and the margin for error on all these numbers is really high. So these trendlines might reflect less on actual changes in behavior and more on the highly-noisy numbers settling towards the true numbers. And if that’s right, then it seems fair to state that the majority of Georgetowners don’t drive to work, either alone or in a carpool.

Even setting aside those that work at home (those that commute by sock?) the statement still stands. Under that analysis, 59% of Georgetowners take transit, walk or bike to work. (Those annoyed by GM’s transit proselytizing will probably point out that driving alone is still the plurality choice, which is also true. For now.)

3 responses to “Counting Georgetown: Getting to Work”