The Streetcar Should Use the Whitehurst

It is all the rage these days to be extremely pessimistic about the city’s plan for a streetcar network. The single section that has been constructed is extremely late and keeps getting later. The council has rewritten how the whole project is to be financed, throwing the scope and timetable of the complete network into question. But GM is an optimist, and he still believes the streetcar will be built to Georgetown, and it’s important for us to plan for it.

Setting aside the question of “if” a streetcar is coming to Georgetown, the largest issue surrounding it is “where” it is coming. There are three conceivable possibilities, but only one truly makes sense: the Whitehurst. Here’s why:

The streetcar line that would come to Georgetown is an extension of the line about to open on H St. As you can see in the above map, the city has settled on a route from Union Station up to K St., across downtown all the way to Wisconsin and K St.

Arguably a better route to serve residents and visitors alike would take the streetcar to M St. in Georgetown (via Pennsylvania Ave. from Washington Circle). In a perfect world this would be the best option. But there’s no way overhead wires will be allowed on this stretch. And without overhead wires, the streetcar needs to run on batteries. This is a feasible technology, but it almost certainly requires the streetcar to have its own lane, otherwise it can run out of power sitting in traffic. Moreover, the success of the streetcar would be greatly enhanced with more dedicated lane miles.

And while it would please a transit fan like GM to have transit lanes down M St., the political will to do so is probably not there (even though the vast majority of people causing the congestion on our streets are simply suburbanites who don’t pay income taxes here and who view M St. as simply something between them and their home.)

K St. appears to be the city’s preferred option at this point, although it has some obvious drawbacks.

First of all, K St. and Wisconsin Ave. is not a terribly convenient terminus for residents or visitors. While the BID has ambitious plans to liven up lower Georgetown, for now other than the park, there’s not much going on down there.

Second, this would essentially eliminate any possibility of the streetcar continuing on to Georgetown University, despite the school’s wish for it to do so. There are some theoretically possible ways the streetcar could get from K St. up to the campus, but they’re all extremely impractical and/or expensive.

The best option is one that GM had previously been the most skeptical about: the Whitehurst.

The idea is that streetcars would come from Washington Circle (either underneath it or around it) and get on the Whitehurst from K St. It would travel down to about above Wisconsin Ave. and stop.

How do riders get to it, you ask? This was GM’s primary hangup until recently. One option is to construct some elevators, but that would be expensive, garish and probably too slow. A huge ramp over to Wisconsin Ave. would also be theoretically possible, but unlikely to be approved.

Here’s the simply solution: build a ramp over to one of the buildings along the Whitehurst: 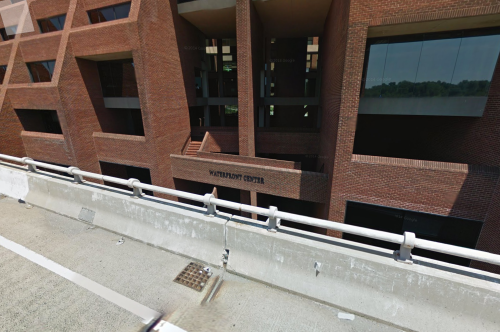 It wouldn’t take much to connect the Waterfront Center to the Whitehurst. There’s an outdoors staircase that could easily be incorporated into the design. From there, there’s a short and level walk right out to Wisconsin Ave: 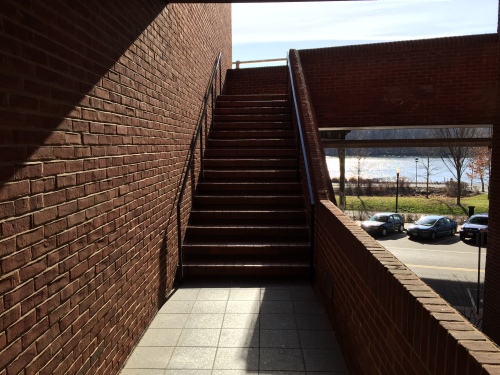 Once you exit, you’re already halfway up the hill to M St. No, it’s not perfect, but it’s the best option we’ve got.

Moreover, from the Whitehurst it would be easy to extend the streetcar all the way to the Georgetown campus via Canal Rd. The hill from Canal Rd. up to the New South parking garage is not too steep for streetcars. The terminal could now reach deep into Georgetown’s campus by way of the giant garage.

Also, the streetcar could still have a transit only lane. For the most part, the Whitehurst experiences rare congestion. But when it does happen, it’s primarily only one side, eastbound in the morning and westbound in the afternoon. The streetcar could take one of the road’s lanes for itself. Then a single reversible lane down the center could be swapped back and forth ensuring that the more congested direction has at least two lanes during peak hours.

What do you think?

One response to “The Streetcar Should Use the Whitehurst”