An Under Armour, But a Beautiful One at That 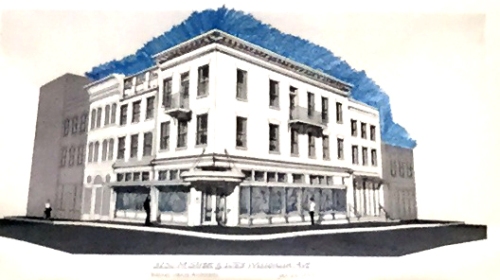 As predicted by GM, the most interesting item from last night’s ANC meeting was the future of the old Nathan’s Building. Anthony “Ankie” Barnes, of Barnes Vance Architects, presented a stunning renovation of the historic building and won approval from the commission.

Barnes took the commission and the audience through a fascinating history of this prominent building. It was built during the Civil War. No photos exist of what it looked like in its original form, however it is likely that the second two stories have been hardly touched and probably reflect what the first floor looked like. Barnes did, however, have a series of photos showing the dramatic changes that the first floor went through during the 20th century.

In the 1920s, the first floor was dramatically changed to include box windows, common through commercial corridors in DC at the time. Small balconies were added to the north and west facades for use by the upper floors. The original entrance, which was once on Wisconsin Ave., was rebuilt on the corner.

These changes were performed by the Heon family, who purchased the building shortly before. This was intended to increase the retail use for the first floor. For many years a pharmacy operated there.

The next dramatic change occurred in the 40’s when a neon sign was installed on the corner. Also, a metallic streamlined facade was applied to the first floor resembling a diner. This was the time that the first floor was converted to the Heon’s restaurant. The Heon family lived upstairs.

Starting in the fifties, an unfortunate brick treatment was applied on top of the first floor. This started the long slow decline of the building. Nathan’s restaurant brought the corner life, but the building continued to slowly decay. And we all know what happened when Serendipity got their hands on the building and degraded it further.

And yes, the likely tenant is Under Armour, although Barnes stated last night that the decision isn’t final yet. Would GM prefer a more lively less-suburban mall use for this property? Sure, absolutely. But it will be a beautiful restoration.

GM remembered that one of the original reasons he even started the Georgetown Metropolitan back in 2008 was to push back on the common misconception held by writers like Marc Fisher, who wrote shortly after GM started that “This is How Georgetown Goes Generic” when contemplating the future of the then-Nathan’s building. “Sure”, GM argued, “there are a lot of chains, there are far more independent shops!” This is still true. But it is heartbreaking nonetheless to remember the charm and community created by a great tavern like Nathans. It’s gone. Its tacky successor is gone. And now we get Lycra.

But at least that building will be more beautiful than most anyone still alive has ever seen it.

This was a remarkably short and efficient meeting. Lt. John Knutsen of MPD presented the monthly public safety report. The notable items:

Other than crime matters, the ANC approved the plans for the fortieth Marine Corps Marathon scheduled for this fall. Commissioner Birch had a nice retort to anyone who might complain about the temporary street closures: “Just participate in the race and the street closures won’t affect you.”