Most people have a pretty clear idea of what Georgetown is, and what it was. But there are some weird things about Georgetown and its history that most people don’t know. Here they are ranked:

In December 1970, John Denver was in the middle of a two week stint at the famous Cellar Door club (which now houses the Cappriotti’s sandwich shop). He was invited to a late night jam at the apartment of the club’s sound guy, Bill Danoff, at 31st and Q. Danoff and his girlfriend, Taffy Nivert, had a half-written song about driving about Maryland. Denver changed the lyrics to West Virginia and helped finish the song. He debuted it at the Cellar Door the next night and received the longest ovation in the club’s history.

Take Me Home, Country Roads, a song written by a Colorado-man about a state he never visited, while hanging out late night in Georgetown, DC.

It’s true. From 1890-1899, the Washington and Georgetown Railroad ran a cable-car network through Georgetown. The Car Barn still has some remnants of that time on the Car Barn. In 1900 the company moved to electric power.

#3 – The Original Georgetown Bulldog was Named Stubby, was a WWI vet and is on display at the Smithsonian

Stubby was a famous war dog from WWI who obtained the rank of Sergeant. He was adopted by Robert Conroy who brought him with him to Georgetown University after the war. Already world renown, Stubby became the mascot of the Hoyas football team and began a tradition of bulldog-mascots for the school.

After he died in 1926 he was stuffed. In 1956 he was given to the Smithsonian where you can still see him. 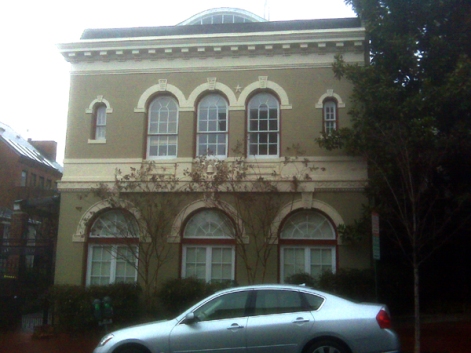 Before it was called Hamilton Court it was the Hamilton Arms. And back in the days when Jackie Kennedy was sending out hand-written invites to stuffy dinner parties, the real party was taking place there.

But before we get to the parties, let’s set the scene. There was an article in the Washington Post published in 1978 documenting the shape of the Hamilton Arms in its twilight. It was a “shabby collection of swiss-style village houses and apartments”. The Post further describes it as “a deteriorating Georgetown complex where sculptures of Dickens characters adorned the outdoor walls, where delicate flowers were painted on the shutters and glossy pastel pieces of ceramic tile were glued on flower pots and around the empty swimming pool.”

The whimsical art was attributed to “folk artist-in-residence” Mary Brinkley Reid whose family owned the property until her death in 1977. It would seem from its state today that most of what made the place architecturally and artistically interesting was eventually torn away.

According to written accounts, in its salad days the property contained the Hamilton Arms Coffee House. The coffee shop was built in 1939 by Milo Brinkley, Mary’s father. He wanted to recreate a European-style village and thought it needed a gathering place. The community and the coffee shop eventually attracted early beatniks. And speaking of salad, the coffee shop was supposedly the site of the first salad bar in the District.

Oh, and in the 1950’s it was supposedly the location of Georgetown’s first pot-party.

It was a visit to the Hamilton Arms that Stuart Davidson saw the New Yorker cover that inspired him to open Clyde’s. That magazine still hangs by the restaurant’s front door.

Well, sorta. In 1896 Herman Hollerith-hired to help the Census Bureau to tabulate the population-opened the Tabulating Machine Company in a warehouse on 31st St. (that street again!) next to the canal. Long story short, but that company merged with a couple other companies in 1911 to form the Computing Tabulating Recording Company. That company eventually changed its name to International Business Machines.

You can now order oysters on the half shell at the old warehouse, which now houses Sea Catch. A plaque outside the warehouse placed by IBM commemorates the company’s tie to the location.