You Might Want to Pay Attention to this Seemingly Boring Topic 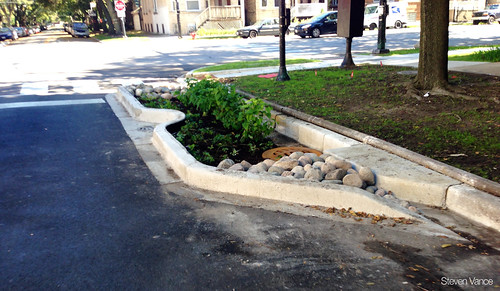 Water, water everywhere and not a sufficient sewer system to handle it in an environmentally sound manner. That’s not just an excerpt from the world’s worst sailor’s poem; it’s a good description of Georgetown when it rains heavily. As GM will explain, that causes some serious problems that DC Water is under a court order to remedy. And to remedy the problem in Georgetown, they’re considering the creation of “Green Infrastructure” (“GI”). A lot of GI. So much that you might wake up one day with trucks outside your house ripping up the street and sidewalks, and you’ll shout “Nobody told me about this?!” Well, here’s your opportunity to be told before the trucks arrive (and possibly forestall those trucks from coming in the first place).

As GM has written about a (surprising) bunch of times before: our water agency (DC Water) is under a court order to remedy the pollution created when it rains too much. Here’s why: the pipes that take our rain also takes our, ahem, “waste” (i.e. poop). On a normal day, those pipes bring everything to the Blue Plains treatment plant and clean it up. But when they get overloaded, they dump the excess right into the Potomac.

DC Water is addressing this problem with a city-wide effort. They’ve already dug a couple fabulous tunnels to act as massive underground reservoirs, holding the rain water until Blue Plains can work through the backlog without dumping the excess into the river.

The existing tunnels are on the east side of town, focused on the Anacostia watershed. DC Water is also contemplating a tunnel along the Potomac. Originally it was to stretch approximately from the Kennedy Center all the way up past the Georgetown Waterfront park. But tunneling is expensive, and DC water is exploring whether a cheaper alternative can’t be used to supplement a smaller Potomac tunnel.

And that alternative is GI. The idea is that by capturing the rain before it even hits the storm drains, it will limit the need for a huge tunnel. So DC Water is going to focus its GI effort squarely on west Georgetown.

But what that means is still anybody’s guess.

Some hazy details, however, have emerged from meetings with DC Water:

And so on. Make no mistake: this would be a massive undertaking. Construction is scheduled to start in 2017. DC Water has budgeted $30 million for this project, that’s about three times the cost of the O & P St. rehabilitation.

Some members of CAG and the ANC have been trying to work with DC Water to get answers, but they haven’t been terribly forthcoming. And yet DC Water still wants to “hear” more from the community.

GM loves the idea of green infrastructure. He’s already got a rain barrel and would love a green roof if it weren’t made somewhat unnecessary due to the rain barrel. And our tree boxes should be a lot bigger where possible. It’s good for the sewers and the trees. Bioswales are neat too, and can function as bulbouts, which are also a good thing.

But what would be necessary to significantly address the runoff problem in Georgetown would probably require far too disruptive construction. Before we start digging up the streets, we need far clearer answers from DC Water. And one thing that might help get answers is if more residents were made aware of the issue. If somehow you’ve made it all the way to this point in the article, then thank you. You’re doing your part. Spread the word. And keep an eye out for public meetings on the topic. They should be forthcoming.