Why Do the Exorcist Steps Exist in the First Place? 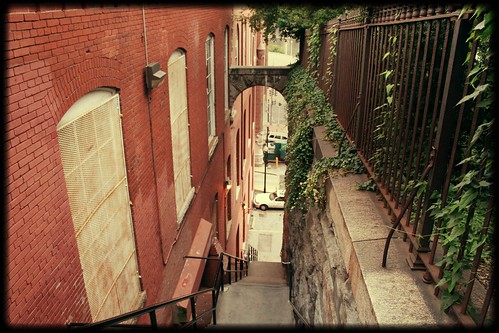 Tonight the city is honoring the special place that the so called “Exorcist Steps” have in the city’s history and designating them a “significant location”. The author of the original book, the director of the film and a host of other dignitaries will be on hand to mark the occasion. But it got GM wondering, how did such an odd set of stairs come about in the first place?

After digging a bunch, GM only came up with partial answers, unfortunately.

Unsurprisingly the stairs were built in conjunction with the adjacent Car Barn. The Car Barn was built in 1895 by the Capital Traction Company, which was actually running a cable car system at the time (that’s why some of the building’s decorations have flywheels on them). There’s an interesting article in the Washington Post from December 1894 profiling the elderly famous author Mrs. E.D.E.N. Southworth who lived in a cottage perched next door on Prospect. Here it is after she passed away when it became a bit of a tourist trap:

The Union Station at the end of M street, in Georgetown, where the Great Falls railroad will join the Georgetown road will be built on the property just east of Mrs. Southworth’s historic home. Already the great grove of trees in front of it is cut down and the excavation has commenced, which will leave it sixty feet “above ground”. The dynamite blasts shake it to its foundation. In a little while the bare brick walls of the station will cut off most of the fine view in this direction, which has partly given it its name. But there is still the great stretch of the Potomac south and the hills beyond. “Prospect Cottage” can never have its outlook here taken away while it stands.

The cottage was demolished in 1942. In 1950 a new townhouse was constructed in its place. That is the Exorcist house:

Prior to the construction of the station, there was essentially a steep rocky hillside running from Prospect down to M St. From old maps it looks like 36th st. flowed over this steep hill much like 35th still does today (this is from 1874 when 36th was still called Lingan St.):

But in order to fit the large streetecar station, Capital Traction essentially had to dig into the the side of the hill and level the ground. Here are a couple photos from the construction. You can see how the excavation created the cliff we’re now familiar with:

Unfortunately neither of those photos shows the stairway.

After construction, the form we’re familiar with today was already present (north is to the right):

The “stone steps” and the stone retaining wall are there. Frustratingly, GM could find no mention in the Post archives about why they decided to construct such unusual steps. There was not a particularly huge need for them. Just as now, there is 35th St. just steps away that gets you to M St. just as well.

Later, a shed was constructed at the bottom of the steps:

The first use of the term “Exorcist Steps” by the Post came on May 26, 1978 in an article by Patricia Hass describing her starting a jogging routine.

But before then, the only explicit mention of the steps at all that GM could find was from 1929. Blanche Howlett wrote a letter to the editor to complain about a proposal to construct an oil ship wharf on the Rosslyn waterfront north of Key Bridge. She writes that “the scenery around Key Bridge is beautiful. It has already been desecrated in Rosslyn and by the awful looking steps and car barn in Georgetown. Possibly these desecrations can be remedied.”

8 responses to “Why Do the Exorcist Steps Exist in the First Place?”