Now and a Long Time Ago: Stombock’s 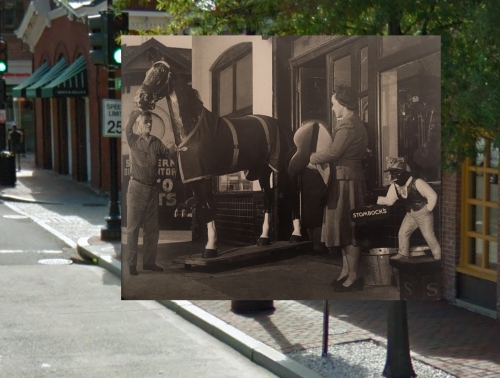 Today on Now and a Long Time Ago, GM stops by what was once the oldest saddle shop in the DC area: Stombock and Son Compay. The store stood at 3278 M St.

According to Capital Losses, the store opened in Georgetown in 1895 across the street at 3293 M St. But only a few years later it moved into 3278 M St. (which now houses J. McLaughlin).

At the turn of the century, a saddle shop in the middle of the city wasn’t an odd thing, seeing as so many people still got around by horse and buggy. But as the automobile took over, the shop switched to the equestrian sport business.

To grab the attention of passersby, the store installed a cast iron life-sized horse, seen above, that they’d roll out every morning.

The store finally left Georgetown in 1970 and moved to Poolesville, MD, and then later Gaithersburg. It closed for good in 1990.

2 responses to “Now and a Long Time Ago: Stombock’s”