How to Make Another Georgetown 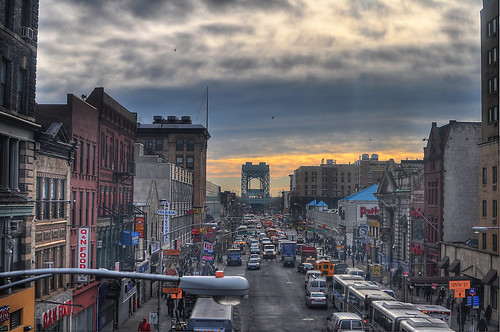 Last weekend the New York Times published an interesting article titled “The End of Black Harlem“. It is, not surprisingly, about the the gentrification of Harlem, New York. The author, Michael Henry Adams, argues convincingly that the changes are not just about the neighborhood “going upscale” but rather are more about the displacement of African Americans and their rich culture that made the neighborhood famous in the first place.

But what caught GM’s eye about the article are the parallels to Georgetown and how Adams’ own prescriptions will only make what happened to Georgetown happen to Harlem, but faster.

As GM has written about before, Georgetown once had a thriving Black population. It was not nearly as large or influential as Harlem’s, but it was significant nonetheless. It declined largely through a gentrification process not unlike the ones currently sweeping through neighborhoods in cities across the country. And while it’s debatable whether it was the primary catalyst or merely secondary, the rise of historic preservation almost certainly accelerated the displacement.

By insisting on strict building codes and historic standards, the cost of maintaining a house in Georgetown rose dramatically. And in the process of “saving” historic Georgetown–both genuine historic elements, as well as faux elements (e.g. brand new brick sidewalks, most shutters, random bald eagles, etc.)–contributed to a rising desirability to living in Georgetown. This naturally caused spikes in real estate prices, and that caused speculation, which caused Black residents to be evicted, and so on.

There’s obviously a lot to be desired in some of this. Saving old architecture is worthwhile. Improving the quality of the building stock is worthwhile. Beautifying the neighborhood is worthwhile. But getting those things without also displacing existing residents has been an elusive goal in cities throughout the world.

One of the strongest measures that can limit displacement is to allow more housing. Lots of it. It’s simply a matter of supply and demand. Interest rises in a neighborhood, which causes demand for housing to rise too. And this causes housing prices to increase. If you can increase supply, the prices won’t rise as much. It doesn’t always work out perfectly as that, but the forces of supply and demand are in play regardless. Denying it won’t make it not true.

Which brings us back to Harlem.

Throughout his piece Adams mentions the necessity to fight against certain tangible manifestations of gentrification, namely the very construction of new housing that could slow down the gentrification he opposes:

A few years ago I was on Eighth Avenue, also known as Frederick Douglass Boulevard, picketing a fund-raiser for a politician who was pushing for denser mixed-use zoning along 125th Street, the “Main Street” of my sprawling neighborhood. Harlem has seen an influx of tourists, developers and stroller-pushing young families, described in the media as “urban pioneers,” attracted by city tax abatements. New high-end housing and hip restaurants have also played their part. So have various public improvements, like new landscaping and yoga studios.

We explained that the city was encouraging housing on the historic, retail-centered 125th Street, as well as taller buildings. Housing’s good, in theory, but because the median income in Harlem is less than $37,000 a year, many of these new apartments would be too expensive for those of us who already live here.

[Mayor DeBlasio] has pushed for private development and identified unprotected, landmark-quality buildings as targets. He and the City Council have effectively swept aside contextual zoning limits, which curb development that might change the very essence of a neighborhood, in Harlem and Inwood, farther north. At best, his plan seems to be to develop at all speed and costs, optimistic that the tax revenues and good graces of the real estate barons allow for a few affordable apartments to be stuffed in later.

And, far from government intervention to keep us in our homes, houses of worship and schools, to protect buildings emblematic of black history, we see policies like destructive zoning, with false “trickle down” affordability, changes that incentivize yet more gentrification, sure to transfigure our Harlem forever.

While Adams identifies rent control and public housing as possible solutions not being adequately pursued, he clearly identifies the primary problem to be the construction of housing and any policy that encourages it. He is, in a sense, as worried about the displacement of the building stock of Harlem as he is of the displacement of people. It is certainly understandable to want to preserve every bit of historic Harlem, and to prevent the wrecking ball from knocking down a single brownstone. But down that path lies Georgetown. And it is no less White than the gleaming yoga studio-filled towers Adams objects to.

People want to live in Harlem. If they can’t move in to new condos, they’ll buy up old houses. The end result will be the same, it will just will arrive a lot faster.

It leads to an ultimately tragic decision. You can “save” Harlem in a purely physical sense the same way we saved Georgetown, but it will hasten the demise of the culture that animated that physical space. Or you can sacrifice parts of that physical form to accommodate the rising interest. And in doing so give at least a small hope that the parts of the neighborhood that really matter can be saved.

People or buildings: We can’t save both.

5 responses to “How to Make Another Georgetown”