The National Park Service has recently release an environmental assessment of the proposed “Non Motorized Boathouse Zone”. This report moves us ever so slightly closer to the construction of new boathouses along the Potomac in and near Georgetown.

History of Boathouses on the Potomac

Curtesy of the Potomac Boat Club.

Boathouses have long been on the Potomac in Georgetown. There were once as many as six along the shore. The first was the Potomac Barge Club, founded in 1859. The club built the boathouse seen above at what is now 31st and K St. In 1908 they sold that location and moved to where the club (which was renamed the Potomac Boat Club) now sits.

Just up the river from this 1908-built boathouse is the only other historic boathouse still around, the Washington Canoe Club: 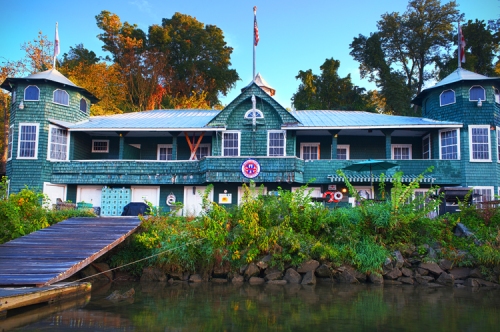 (While the club still uses this property for their paddling activities, the building itself has been indefinitely closed until repairs can be made).

From this old map, you can see the original location of the Potomac Boat Club, and another historic boathouse (now long gone) for the Columbia Athletic Club: Efforts to Bring Back More Boathouses

There have long been efforts to construct more boathouses along the Georgetown waterfront. In fact, it’s hard to understate just how dragged out those discussions have been.

For perspective, the Washington Post once ran an article all about how more boathouses are needed and about how NPS was taking steps to get them built. A baby born on the day that article appeared could have graduated from law school by now.

That effort itself was the product of an even older report that GM has discussed before: the 1987 masterplan for the Georgetown waterfront. Included in this plan was the construction of the waterfront park, the creation of the Capital Crescent Trail, and the creation of Francis Scott Key Park. The plan also was the first to put forward the idea of a “non-motorized boat zone” for this section of the river, along with the construction of new boathouses.

Who would build these boathouses? Two leading candidates have always been Georgetown University and George Washington University. (Georgetown actually owns land along the river quite a bit upstream of the bridge. It has long floated the possibility of a land swap with NPS to build a boathouse just upstream from Washington Canoe Club. No resolution has been reached, and the most recent NPS study does not incorporate any such swap.)

Despite all the discussions through the 80s, 90s, and 200s, no definitive steps were ever taken towards building more boathouses. In 2013, however, NPS finally issued a report on the feasibility of the non-motorized boathouse zone. This report put forward several different scenarios for new boathouses.

The first was a “high density” option. It would call for the construction of up to six new boathouses: 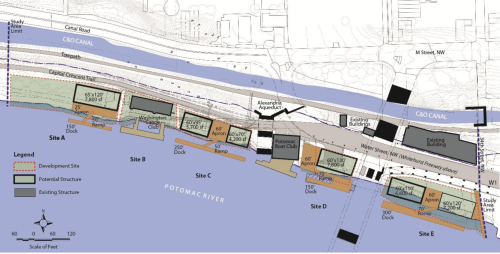 A “medium density” plan would call for only three new boathouses:

And the “low density” option would just have two new buildings (one of which would just be a reconstruction of Jack’s/Key Bridge Boathouse): 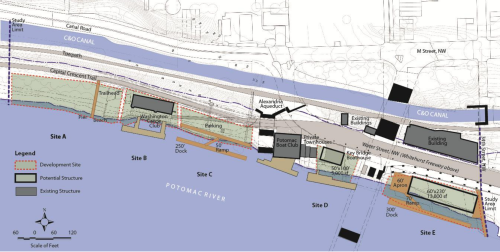 The study repeats many of the same findings of the earlier report, most importantly that demand for non-motorized boating has soared in Washington and more facilities are needed. But rather than present a sliding scale of options from low to high density, the report puts forward two options: build or no build.

And the build option is essentially a modified version of the medium density plan above: 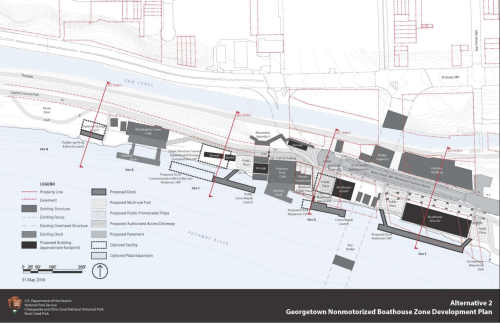 It would allow for the construction of only two new true boathouses. One would essentially replace the Key Bridge Boathouse and another much larger facility would go just east of the Key Bridge on a parking lot owned by the city and used for gravel storage. Two addition boat storage buildings would be possibly allowed on either sides of the Washington Canoe Club.

The study avoids discussing the Potomac Boat Club or the three odd rowhouses next door (the only truly waterfront homes in all of DC). These properties are all privately owned. (GM has long heard that GWU, which owns two of the rowhouses, hopes to join these properties with the land at Key Bridge Boathouse and construct their boathouse there. The study does not contemplate this possibility.)

Please read the study for yourself. Comments will be accepted until September 30th.