A Detailed Look at the Ambitious Proposal for the Canal 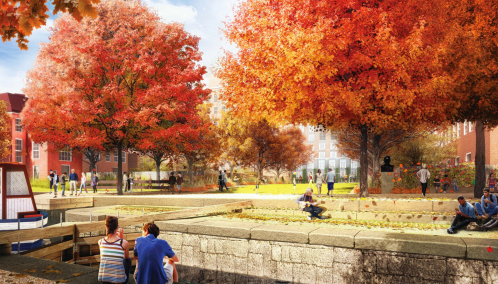 Georgetown Heritage, a non-profit established to restore and improve the canal, has issued an ambitious proposal to do just that. Call it the High Lineification of the canal, if you will, but it is nothing if not dramatic.

The plan itself divided the canal through Georgetown into eight distinct sections: The Aqueduct, the Bend, the Walls, the Groves, the Locks, Rock Creek Confluence, Rock Creek and Mile Marker 0. Here are some of the more significant alternatives with each of these sections.

The plan puts forward two proposals for improving the abutment: Alternative A and Alternative B. In both alternatives, the abutment would receive significant improvements to provide more safety and a finished look to what is currently essentially a ruin. The biggest difference between the two alternatives is that Alternative B proposes the construction of a decorative trestle, meant to evoke the structure of the old Aqueduct Bridge: 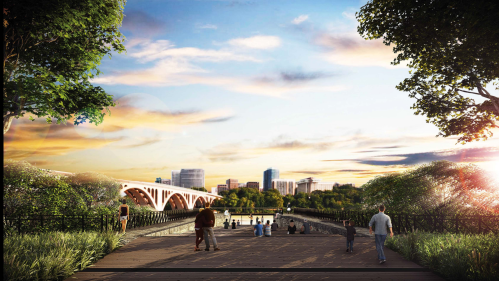 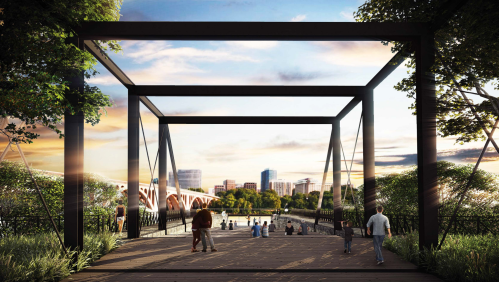 The Bend section runs from 34th St. to 33rd St. The work would include restoring the towpath and adding new seating and gathering spots. Alternative B for this section would include a rebuilt 34th St. bridge over the canal, including new ramps and an elevator for accessibility:

The Walls section runs from 33rd St. to Wisconsin Ave. This name is appropriate because this stretch of the canal has a distinctive canyon-like appearance due to the tall walls that stand close to the canal’s edge. Iterations of the plan would dramatically change the shape of the walls in order to create gathering and/or performance areas: 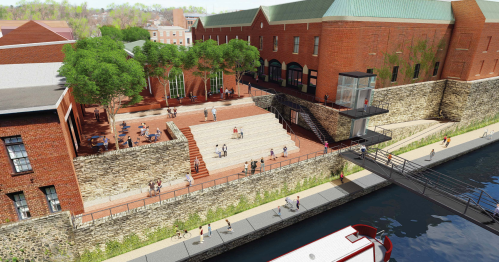 The above rendering depicts a proposed staircase descending from the back of Dean and Deluca down to a catwalk above the towpath. It is unclear what impact this plan would have on the access to the underground parking garage located there.

A similar proposal is suggested for the section of the walls just west of Wisconsin Ave.: 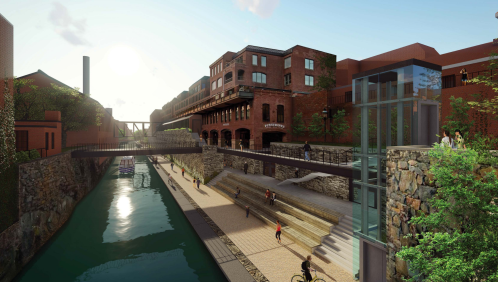 In both of these renderings you can also see the appearance of the proposed elevators. These will greatly increase the accessibility of the canal towpath to people with disabilities or those with strollers, and the law may require them.

The Grove consists of the stretch between Wisconsin Ave. and Thomas Jefferson St. Few significant changes are proposed for this section beyond improving the landscaping: 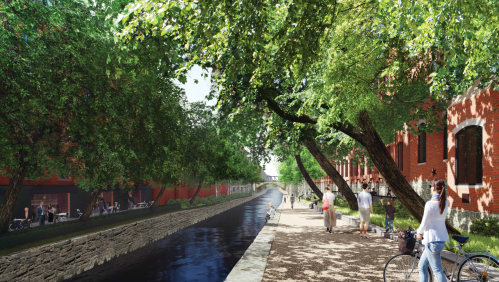 Here it would also would be appropriate to discuss some of the proposals for the path itself. As you probably know, the current towpath is in terrible shape, and threatens to collapse into the canal at some points along the way. The proposal would shore up the path significantly. Beyond that, the plan offers several options of how to rebuild the path, in increasing size.

First, here is how the path appears for much of the way: 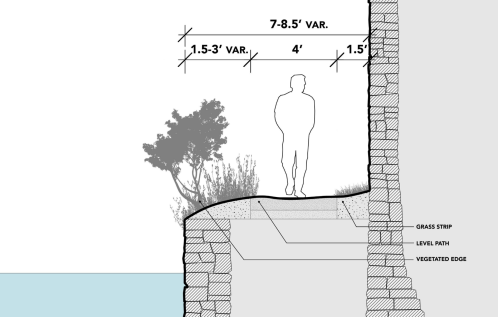 It is quite narrow at spots and presents serious accessibility issues. To address those concerns, here are the proposed options:

The first option would generally refinish the current path with level hardscape across the entire width of the path. 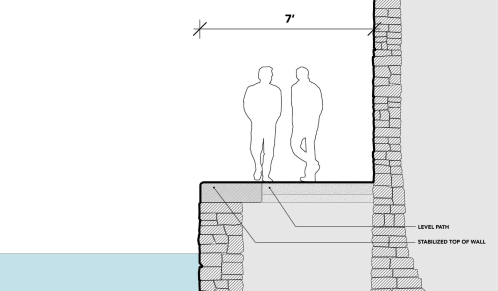 The second option would install a cantilevered edge on the side to give enough room for a 9 foot wide path and maintain vegetation with an occasional bench. 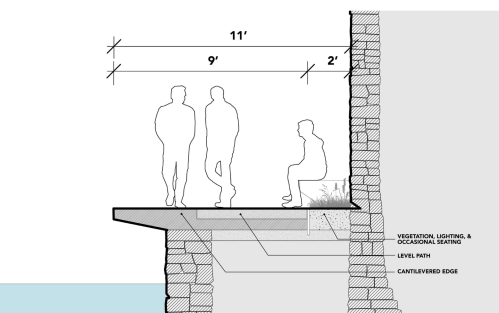 The last option would expand out the wall’s edge to maintain the current look with vegetation along the side. The expanded space would still provide room for a 10 foot wide path and vegetation with the occasional seating on the north side. 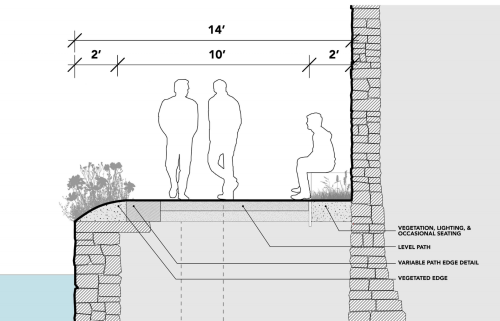 The next section of the canal is the Locks and it stretches from Thomas Jefferson St. to 29th St. This section obviously features the canal locks themselves. But another prominent feature of this section is the National Park Service’s visitor center and the mule yard between Thomas Jefferson St. and 30th St. This space has been essentially abandoned ever since the canal boats stopped running several years ago. One proposal includes a new ticket kiosk: 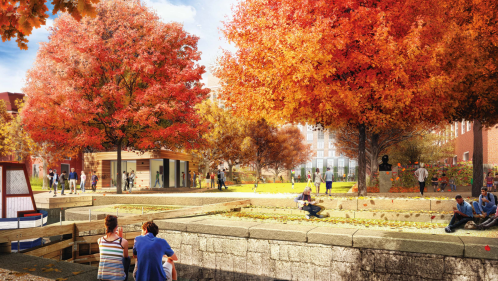 The next section is the Rock Creek Confluence and runs from 29th St. to the intersection of the canal and Rock Creek. The plans float several possible footbridges to connect the shores: 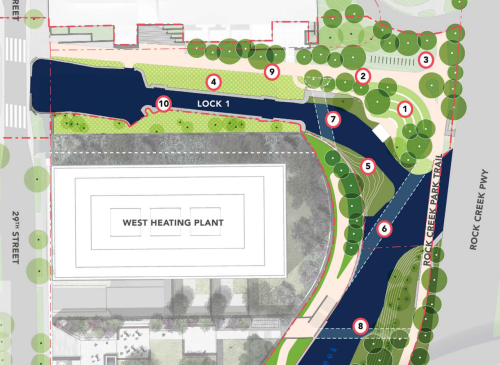 The next, and second-to-last, section is Rock Creek, and it includes the area surrounding where K St. crosses Rock Creek. One significant proposal for this section includes a new bridge to improve pedestrian and bicycle connections from K St. to the Rock Creek Parkway path: 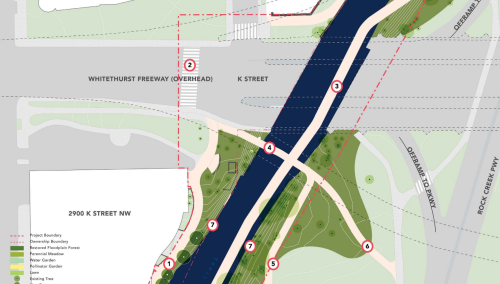 As you can see it would also include a new elevated boardwalk above Rock Creek, running underneath the K St. ramp. The proposal offers this as a visual example of what the boardwalk could look like: 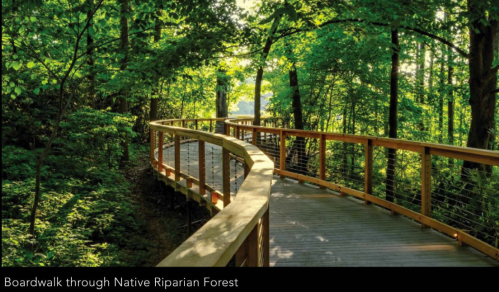 Finally, the last section, Mile Marker 0. This section includes the point at which Rock Creek (and thus the canal) enters the Potomac. The proposals for this area primarily involve the construction of new landscaping and the construction of a foot bridge.

In one option, the foot bridge merely crosses the old tide lock: 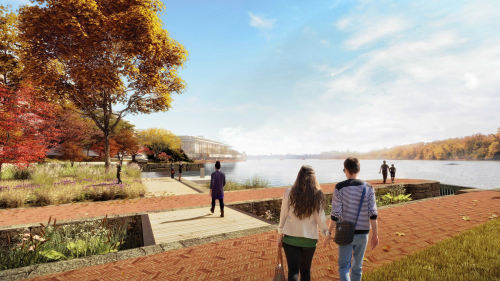 In the other proposal, the bridge crosses all the way to the Rock Creek Park Trail: 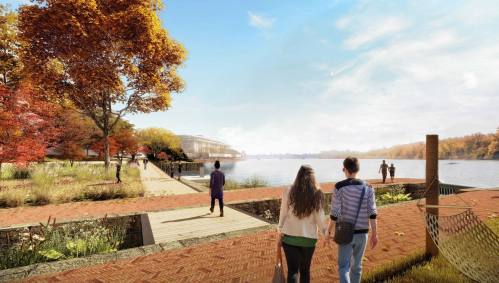 Phew. That’s a lot to take in. Public comments are invited until December 11th. Submit them here.