This week on Know Your Trees, GM is discussing a tree you’re unlikely to find along the streets of Georgetown, but which you’ll easily find in the surrounding forests: beech.

Their leaves are medium sized and have a simple pointed oval form: 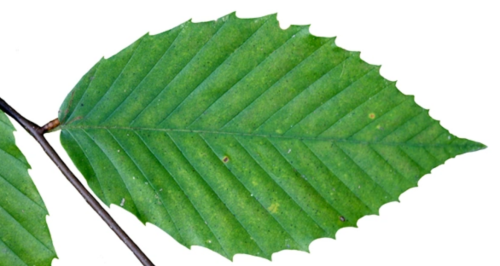 In the fall they turn a bright yellow.

According to DDOT’s street tree map, there are just two beeches in Georgetown. (They’re on the southeast corner of Q and 32nd.) The reason they don’t get planted along streets that they grow slowly and do not tolerate urban environments very well.

But they thrive in forests. In fact they are what’s known as a climax species. For trees, this means that as a forest develops from an earlier state (say, from a pasture, or from a devastating wildfire) they are the trees that will arrive and dominate last. And will continue to dominate until the forest is significantly altered again.

In large parts of the eastern United States, if a forest is left to grow and develop, it will likely eventually become a beech-maple forest. As the name implies, this is a forest dominated by beech and maples trees. Part of the reason this happens is that these trees do well in the shade. As they grow up in forest dominated by earlier trees, they eventually grow tall enough to block out the light. This limits the growth of non-beech or maple trees, so it becomes a self-perpetuating process.

Lots of forests around DC didn’t exist 100 years ago (most eastern forests were leveled for the wood and the land). So they may not have reached the climax stage yet. But some have. Parts of Dumbarton Oaks Park have become dominated by beeches, particularly by the entrance.

Oh, and carving your initials (or anything else) into beech trees is bad for it. Don’t do it.