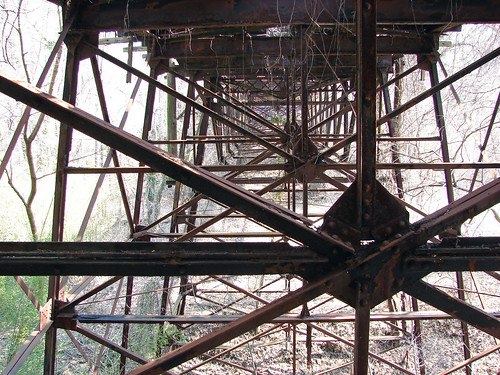 The DC Historic Preservation and Review Board ruled last week that WMATA’s application to raze the foundry branch trolley trestle should be denied. This is an important step towards saving the bridge and repurposing it for pedestrian and bike travel.

The bridge once carried streetcars from Georgetown out to Glen Echo amusement park. But the streetcars stopped running in 1962, and the trestle has just sat there ever since. As a result it is in terrible shape and represents a genuine hazard. But that is not enough of an excuse to tear down the last remaining streetcar bridge in DC, at least not according to HPRB.

Ultimately the plan–supported by the citizens associations of the Palisades, Foxhall Village and Georgetown–is to repurpose the bridge to carry foot traffic between Foxhall and Georgetown, with the aim of eventually linking it up with a trail using the old trolley right-of-way through the Palisades. But the bridge needs to be saved first.

How WMATA ended up as owners of the bridge is actually a fascinating story. In short, essentially the old private streetcar company was sued for illegally hiking the fare, and as settlement some of its assets were transferred to Metro as compensation to the general riding population. This bridge was one of those assets. But WMATA wants nothing to do with it. And rightly so. It’s not useful to them at all. But it is useful to the District. Right now DDOT is conducting a study to consider the feasibility of the plan discussed above. Hopefully this will lead to the District taking the bridge over and restoring it.

That won’t be cheap. The Post reports that it is estimated to cost upwards of $2 million, although simply stabilizing it would cost about $715,000. Keep in mind that tearing it down would cost WMATA between $750,000 and $1 million. So some entity is going to have to spend the money, the only question is who and what is the net gain. In a neighborhood where people are forced to maintain the tiniest of details in the interest of historic preservation, the answer should be fairly obvious.