When Dolphins Swam to Georgetown 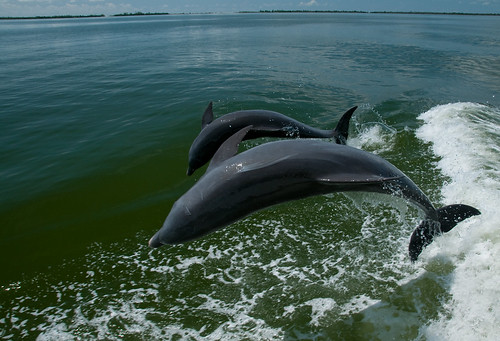 It’s hard to believe it, but right now a large number of bottlenose dolphins call the Potomac river home, for at least part of the year. In fact, hundreds of them have been spotted in the Chesapeake Bay, near the mouth of the Potomac River. And it’s from this large group that the Potomac sightings likely originate.

It’s viewed as an example of the great progress that the cleanup of the Chesapeake Bay has made that these dolphins have settled in. (In fact it was announced last week that the bay is cleaner than it has been for 33 years). But this isn’t the first time dolphins have swum the waters of the Potomac. In fact they came as far as Georgetown once.

According to Atlas Obscura:

IN JULY OF 1844, A pod of bottlenose dolphins showed up in the Potomac River. Surprised, a group of men grabbed their guns and hopped into some boats. They followed the dolphins past the future home of Arlington National Cemetery, past John Tyler’s White House, and all the way upriver to Aqueduct Bridge, at which point they finally let them be.

The Aqueduct Bridge was the bridge that once stood immediately north of where the Key Bridge now stands.

Atlas Obscura notes that the fact that this encounter was recorded in the history books suggests that they were not a common sight. But who knows? Maybe if we continue to clean up the bay and the Potomac, one day you’ll be able to bring a bucket of mackerel to the Waterfront Park and feed the dolphins instead of the ducks. (You almost certainly shouldn’t do that, though, should that day come…)