Exactly ten years ago this Thursday, GM started publishing the Georgetown Metropolitan. The name was chosen in order to continue the publication of an earlier Georgetown Metropolitan, a newspaper that was published in the then independent city from approximately 1820 to 1837. The photo above is from July 12, 1826 and contains a report on the deaths of former presidents Thomas Jefferson and John Adams.

Frankly, when he started it, GM doubted it would continue for more than a year or so. But here we are ten years later. And a lot has happened to both Georgetown and GM personally over that period. This week, he’ll rehash some of those events. And today he’ll talk about the “distant” past of 2008 to 2012.

One of the first really “big” topics that GM covered was the proposed construction of the Apple store. The proposal changed radically from iteration to iteration, as you can see here:

Here’s the first one, which was rejected for having too much of a “glassy” street feel. It was submitted in September 2007.

After getting rejected for being too “glassy” Apple waited nine months then submitted this glass box. Maybe it would’ve been great, but man it had no chance of being approved. And so it was.

Then they went a little Pomo with their third edition, submitted December 2008. It also was rejected.

This design was submitted in January 2008. It was basically a lot like the first proposal. It was rejected again, mostly for failing to address the original concern that the glass store front was to undifferentiated.

They finally addressed those concerns several months later by adding fenestration to the glass. That was approved, and that’s what the final product looks like: 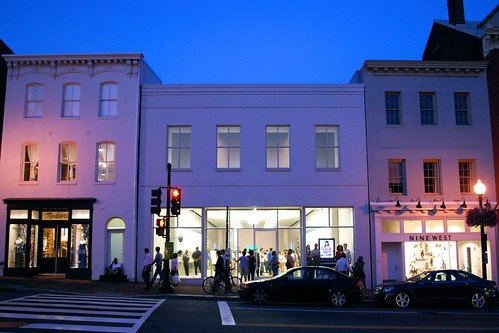 See, it’s basically what the first design was but with metal frames in the glass.

Here are some of GM’s articles about it:

This was one of the first big heartbreaks that happened after GM started the website. Owner Carol Joynt had made her travails public through her blog, which revealed the difficulties restaurant-owners face when dealing with landlords, particularly family-run landlords.

GM first wrote about it in his second month, reporting about the restaurant getting a reprieve from closure. Several months later, Joynt even signed a lease extension. Sadly, by July Joynt had exercised the exit clause and closed the restaurant. This led to one of the more difficult articles GM had to write in the first years, the restaurant’s obituary.

There was time for one last visit though:

The Great Recession’s Impact on Georgetown

GM started the website during the opening months of the financial crisis, and while the impact of the crisis was not nearly as bad in Georgetown as it was in many parts of the country, there were impacts nonetheless.

Perhaps the most glaring change that was brought about at least in part by the crisis was the closure of the Georgetown Park Mall.

The mall died a long slow death. It was a depressing place to visit long before the chains went up on the doors. GM counted approximately 75 storefronts in the mall before it closed. Most of those stores were independently owned. So when the mall closed, it had a big impact on the overall number of independent shops in Georgetown.

The back story is that Herb Miller’s Western Development, which first developed the mall in the early 80s, ran short on money and couldn’t pay on a financial note. The lender foreclosed on the note and put the property up for auction in 2010. Vornado ultimately came away with the property. They kicked out the remaining tenants, gutted the property and stuffed it with a couple big box stores. Then they sold it in 2014 to Jamestown Properties for a tidy $200 million increase over the auction price.

Beyond the mall, the financial crisis had an impact on real estate prices. From GM’s own anecdotal experience, the prices appeared to bottom out in 2010. (He still feels lucky to have bought in 2011, before the prices really started spiking again).

These, of course, are just a couple of the stories of Georgetown from 2008 to 2012. What big stories do you remember?

One response to “Ten Years”