This week on Georgetown Time Machine, GM returns to the excellent archive of train photos maintained by Ben Sullivan. This particular photo is of the old Georgetown waterfront from circa 1958.

The view is approximately at the base of Wisconsin Ave. The prominent building in the back is the old Capital Traction Powerhouse. GM has written about this magnificent building before. It produced power for the city’s streetcar network. However, it was no longer used after 1944. It sadly was demolished in 1966. (The massive concrete foundation is sat on was still around last decade and became a huge problem for the construction of the second phase of the park).

Where these tracks once lay, a grassy park filled with trees and flowers now exists. 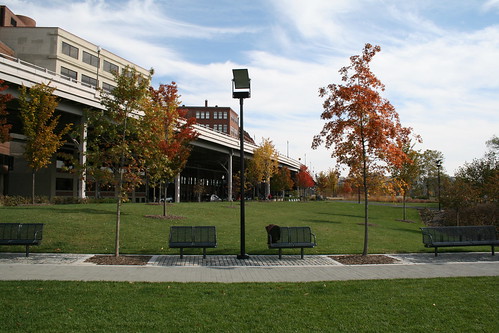 The destruction of the powerhouse was a loss, but we are definitely better off over all with a park instead of a train yard.