Last weekend, GM was in Volta Park and noticed a hawk perched on one of the houses right over the fence. He snapped a picture and sent it to the homeowner (“Holy crap!!!” was the response). It got GM thinking, he’s written guides to trees and architecture around Georgetown, why not birds?

So without further ado, here are some of the birds you’ll find around Georgetown. You may know some or all already, or maybe you recognize them but never knew what they were. Or maybe you don’t know nothing about no birds. GM will start today with birds of prey:

The bird that inspired the post. Specifically, a red-tailed hawk. It is a bird of prey and eats small animals, like rodents. We’ve got plenty of those, so it’s not a surprise to see one of these beautiful birds around town.

Speaking of beautiful birds of prey, we can’t leave out bald eagles. With conservation efforts they have returned to the DC area in ever growing numbers. The best place to catch a glimpse of one in Georgetown is down by the river. GM has seen them on his morning rows a few times.

Speaking of morning rows, the bird that is in great numbers along the river banks is the majestic great blue heron. They probably aren’t technically “birds of prey”, as that term is typically used. But they are primarily carnivores, so GM is throwing them it.

The meat they eat is mostly fish or small reptiles or amphibians. Their sharp beaks act like a spear piercing their prey.

As GM rows up the river towards Fletcher’s, there are often as many as a dozen heron silently hunting for their breakfasts. It’s especially breathtaking to see them in flight through the morning mist. 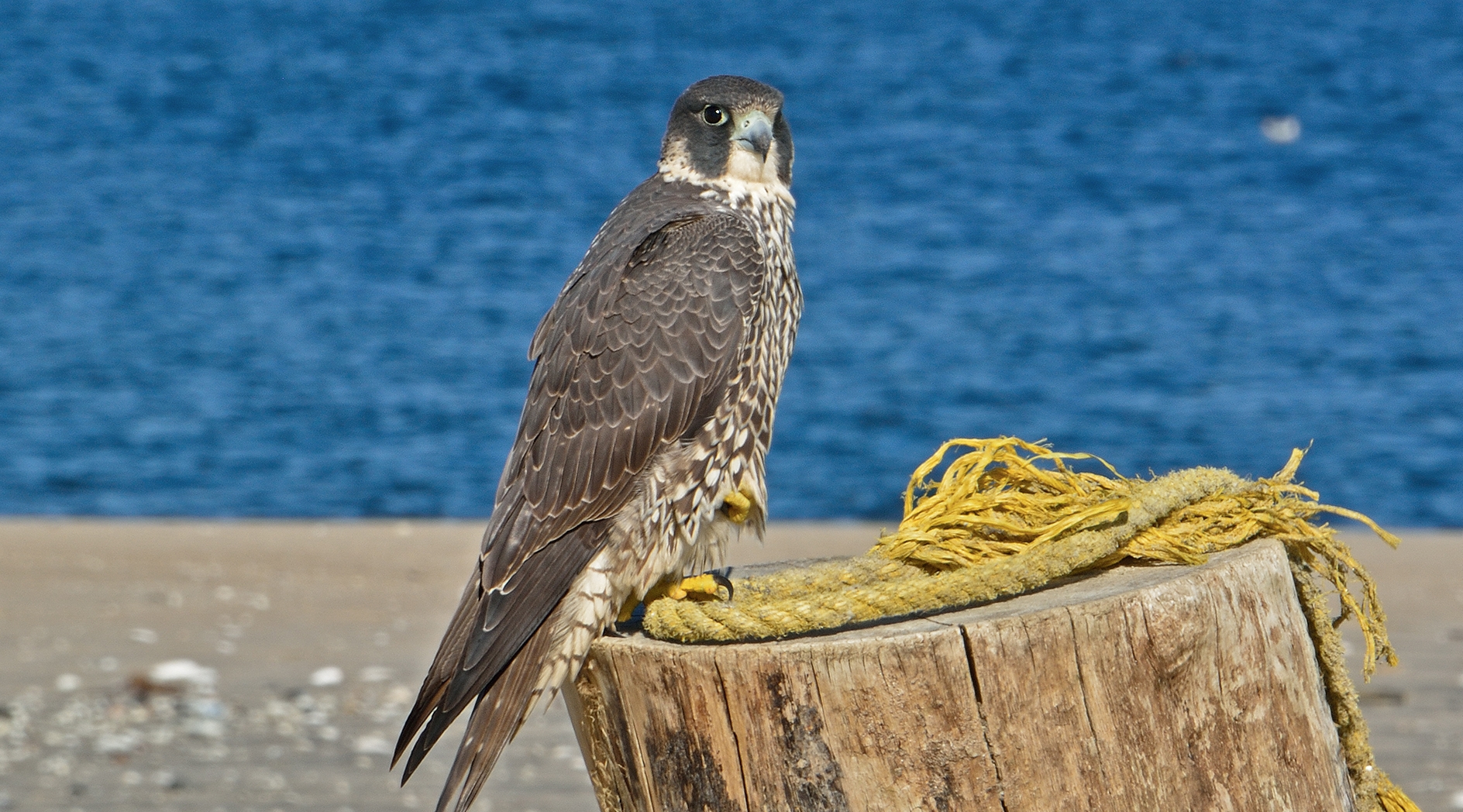 The fastest animal in the world, a peregrine falcon can reach speeds over 200 mph during its diving attacks. They prey mostly on small birds, so they’re probably not super popular at the bird coffee klatches.

GM has seen a falcon only once in Georgetown. It was over the river, and it was fighting a bald eagle for a fish. (The falcon won and flew its prize back to Roosevelt Island).

GM used to live across from Montrose Park. And in the park lived a great horned owl. GM could hear its distinctive hoot practically every night. Once it seemed to be coming practically from right outside the window. Like GM, the bird may have moved on, but it is not surprising to see or hear this bird around Georgetown. However you are probably more likely to see or hear one on a street near a forest, like GM’s former home on R St.

Growing up, GM would often point to a big bird in the sky and ask if it was an eagle. 99.9% of the time it wasn’t; it was a turkey vulture. These were only a few years after the end of widespread DDT usage, so the populations of eagles and falcons, etc., hadn’t bounced back yet. That said, it still seems like most of the time when you see a large bird lazily circling in the sky, it’s probably a turkey vulture.

They are really quite big and despite their ugly appearance they are very important birds! Somebody’s got to eat carrion!

3 responses to “Birds Around Georgetown”