Now and a Long Time Ago: Poplar Alley 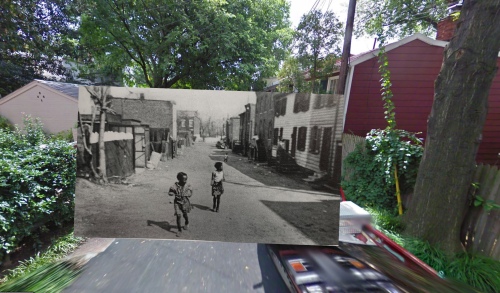 GM’s bringing back an old series this week. It’s Now and a Long Time Ago. And he’s visiting what is now called Poplar St. It’s a tiny, one block street that was once called Poplar Alley, and it was at the center of Georgetown’s historic African American population.

The old photo, courtesy of the DC Public Library, is from the 1920s. At this time, Poplar Alley was one of many alleys lined with small houses around Georgetown (and most of them are still around).

Alleys and alley dwellings were hardly idyllic, and were often filled with scenes of poverty. But they were home to many. Around the time of the photo, Poplar Alley housed thirty-two Black Georgetown residents in eleven homes.

The poverty of alley dwellings inspired the Alley Dwelling Act, a New Deal effort that targeted alley housing across the District. This ostensibly well-meaning act created the Alley Dwelling Authority, which scoured the city’s alleys to identify unsuitable housing. If a house was determined to be unlivable, it would be condemned and the residents ordered to leave. The building owner would be mandated to improve and modernize the home, and provided funding to do so. Once the homes were improved, the former tenants theoretically could move back in, but they often encountered much higher rents to do so.

It was, in effect, one of the first manifestations of gentrification in DC. And it had predictable impacts on the resident population. African Americans continued to live in large numbers in Georgetown for decades after this action, but the numbers began to decrease. And this decrease picked up speed as the gentrification moved from the alleys to the streets.

Now Poplar Alley is Poplar Street. And while the homes are just as small as they were back then, they sell for as high as a million dollars. What a world.